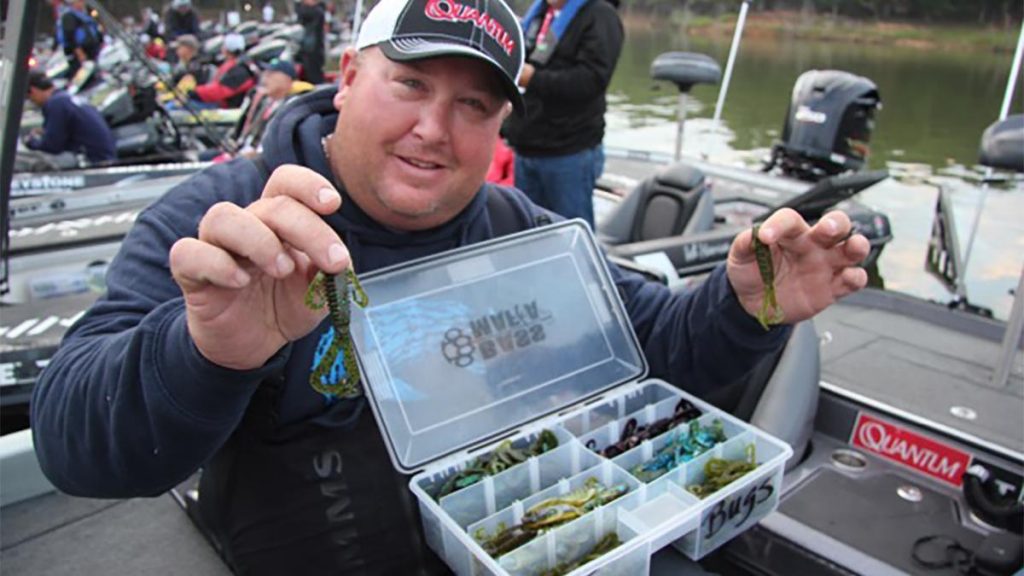 The pro angler that catches the biggest bass of the three-day Toyota Texas Fest event on Lake Ray Roberts in North Texas will win a Toyota Tundra. And while practice reports were tough, the field of 38 best-in-the-world bass pros are very aware of the giant largemouth that live in Ray Roberts.

In fact, the lake record was caught a little more than one year ago: A 15-pound behemoth landed by Shannon Elvington on a Lucky Craft jerkbait in cold March waters.

Four pros were asked what lure they’d choose in an effort to catch a bass big enough to win a Toyota Tundra. Here’s what they said:

Powroznik was proud to show off an entire box full of the soft plastic lure he helped design largely for flipping and pitching.

“Nope I’m not showin’ you the lure,” Hackney grinned. “I’ll show the hook, the weight and the line and I’ll tell you this much—here’s your hint—the lure swims, but not by itself.”

Okay, we’re stumped. But we do know Hackney is spooled up with 60-pound Gamma Torque braid on a new large-spooled reel called a Smoke HD that he says is the finest reel Quantum has ever built. His hook for the mystery lure is a 5/0 Hack Attack straight shank with a 5/16-ounce weight.

Andy Morgan built a career pitching and flippin’ jigs to shallow habitat. So no surprise, he chose a jig; but a heavy one.

“I think you need a 3/4-ounce jig to get deep where a giant bass lives, like way down in one of these flooded trees.”

He chooses a Zoom Big Salty Chunk as a trailer and ties it to 20-pound Gamma Edge fluorocarbon.

The young pro with an amazing list of tournament success chose a rather sleek offering.

“I’m going with a Texas-rigged Strike King craw with a 1/2-ounce weight and 25-pound line.”

When asked why not a jig, large worm or creature bait, he said he felt the craw gets in and out of heavy cover with less snags than a jig or big worm.