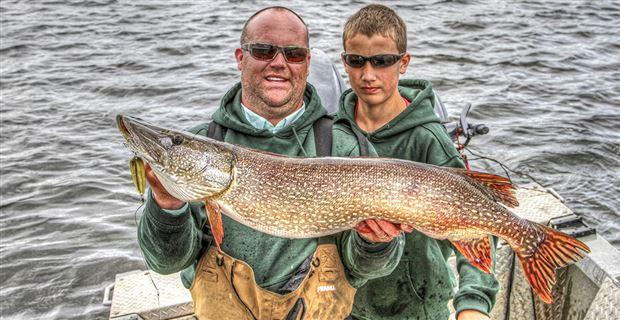 During the day, brisk breezes simulated snow flurries as stone flies begrudgingly yielded their footholds amid the birch trees. At night, howling timber wolves hastened my slumber with a distant lullaby.

Plodding along stony shorelines, black bears watched us with tepid curiosity as nesting eagles catering to hungry chicks eyed us with guarding glares.

A fitting introduction to an ecotourism adventure, no doubt, but this tale takes a different focus: pike — specifically, giant pike.

Define “giant”? Well, most of the angling world recognizes 40-plus inches as the trophy mark. In four days of fishing my group of three anglers saw at least 15 that mark. 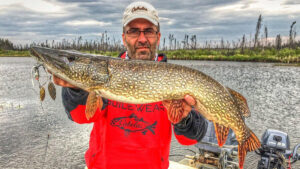 The place was Cree River Lodge on Wapata Lake in Northern Saskatchewan. Entering the nearest town of Stony Rapids, you see a sign that reads “North of 59” in reference to its location above 59 degrees latitude – roughly 51 miles from the Northern Territories boundary.

Yeah, we were up there for this Canadian adventure.

Run by Pat Babcock, the Cree River Lodge sits about an hour outside of Stony Rapids. Rich in wilderness ambiance, the lodge provides ruggedly comfortable accommodations, hearty camp style meals and a fleet of aluminum boats helmed by dialed-in guides who know where the beasts abound.

Adding to the ambient charms, the lodge sits well beyond the nearest roads, so fly-in or boat-in option arrivals. We took the latter and after a 2 1/2-hour flight from Saskatoon, Saskatchewan, lodge staff picked us up in “Stony,” shuttled us down to the river, where waiting boats transported us and the gear to the lodge’s dock. There, a quartet of waiting rods foretold the easy fishing we would enjoy in the evenings. 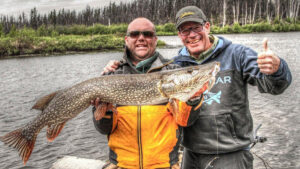 A day of fireworks

We sampled several areas and styles of fishing in three days, with walleye and arctic grayling complementing the northern pike. Day one, by far, exemplified why anglers make the long trip up to this region.

Running up the Pipestone River, which splits from the Cree, we began in a   small bay with a shallow flat adjacent to a deeper bowl with patchy water cabbage. The upstream edge was partially guarded by a rocky bar that washed the area with a back eddie.

Here, Quinn knocked off a 35, a 41 and a 43 before I finally said “Forget this!” and traded my camera and notepad for a rod. Good move, because I employed a No. 2 Len Thompson spoon in the Five of Diamonds pattern to make my northern pike debut with a stout 33-incher.

Next up was a weedy cut that opened into a large bay. Here several large pike patrolled the scattered lily pads. Quinn did battle with one pushing 40, but the beast broke his leader. Undaunted, my fellow scribe got even by sticking a solid 35 on the YUM Money Minnow.

Meanwhile, I had switched to a ¾-ounce Northland Reed-Runner spinnerbait – something I could fire into those pads and hopefully tempt a toothy one. The plan worked and after several pad-probing casts that had Babcock noting my obvious bass roots, the stems parted with the furious boiling of an angry 37-incher.

After a lunch stop, we spent the bulk of the day working a large round bay with pencil reeds and pads lining much of the perimeter and a splotchy collection of troughs and flats, all mixed with the water cabbage that Babcock called essential to big pike habitat. This vegetation, he said, holds the forage big pike seek; so as we crisscrossed the bay, our host advised us to stay frosty each time we came into a healthy cabbage patch.

We picked off a few small to midsize pike here and there but I wanted something bigger. When I asked Babcock if I should switch back to the Tompson spoon, his confident response bespoke the forthcoming thrill ride.

“I think you’ll be pleased with that spinnerbait once we get a little farther in here,” he grinned.

I also grinned 15 minutes later when 46 inches of northern pike crazy crunched that bait, ripped off a roasting run and gave me a memorable tug-of-war.

I’ll never forget the moment I first laid eyes on the woman who’d become my wife, but a close second is the image of a log with teeth gobbling a spinnerbait 10 feet from the boat.

Another cool memory: Joining us for the day was Babcock’s 12-year-old son Cameron — an impressively polite and good-natured kid with solid skills and a clear interest in big pike. Before that day, his personal best was somewhere in the mid-30’s.

Gotta say, that as much as I was doing my inner happy dance when I led my 46-inch milestone into the net, the day’s clear highlight was photographing a lodge owner/proud papa posing with his son and a 42-incher. 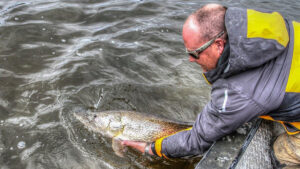 Final tally – five pike, including a 35-incher that literally grabbed my spinnerbait as it dangled in the water. (I was chatting about a previous fish and holding my rod just off the bow.) In that mix was Quinn’s biggest of the day – a 45-incher. That fish eased the pain of the estimated 50-inch monster he had lost 10 minutes earlier.

Three big fish – possibly more – in a dead-end slough the size of a 2-lane road. Homerun potential often hides in the most unlikely of places.

Not sure if it was the hot-sauce that seasoned the fish coating, the lard in which those pike, walleye and diced potatoes were fried, or just the breezy relaxation of dining in a small  island clearing next to an open camp fire. Whatever it was, Northern Saskatchewan kept a piece of my heart – and I know I took home a chunk of that special place. 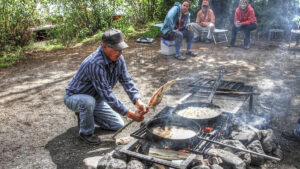