Several anglers, from a myriad of tournament trails have earned themselves extra dollars with LEER “Cover Cash”. Cover Cash is a contingency program offered to anglers who fish sanctioned bass or walleye tournaments and own an eligible LEER cap or tonneau cover. (Qualified Pace Edwards products, too)

Supported tournament trails range from the Bassmaster Elite Series and the FLW Tour to BFLs and team tournament circuits. The contingency money isn’t only offered to boaters either; select payouts for co-anglers are also available.

Just ask Alex Peric, a young tournament angler who currently attends the University of Alabama and has cashed in with “Cover Cash” in several Bassmaster Open tournaments from the back of the boat.

“My LEER has been hugely important to me even before I started earning money from Cover Cash,” Peric said. “As a co-angler, it’s imperative to stay as organized as possible, since I am constantly swapping my rods and tackle from one boat to the next. My LEER cap helps me keep everything secure and organized.”

Even though Peric has only fished five Bassmaster Open derbies as a co-angler, he has won “Cover Cash” in three of the five tournaments. Earning him an extra $150 each time.

It doesn’t matter if you’re in the front of the boat or the back of the boat; it pays to be covered with LEER! 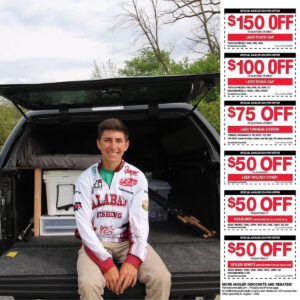 “Since I don’t have a boat when I travel to these events, my LEER cap is the only storage I have for all my fishing gear,” Peric stated. “I really don’t even know how I would bring all of my equipment without it. The fact that my LEER earns me extra money when I am the highest placing finisher is just icing on the cake.”

Whether you’re a boater, co-angler, or just an outdoorsman who needs more storage on your vehicle head to leer.com and find the cap or tonneau cover that makes sense for you.

There is currently a special coupon offer available to anglers at leercovercash.com for up to $150 off select LEER products.  The coupons are only usable until August 1st (8/1), so get to your local LEER dealer and purchase your truck cap or tonneau cover. Then go get yourself signed up for LEER “Cover Cash”.

For a full list of eligible tournaments under, or for more information on the LEER “Cover Cash” Program head to leercovercash.com.  If you’d rather pick up the phone, just give Kristie a call at (918) 742-6424 and she’ll help get you signed up.