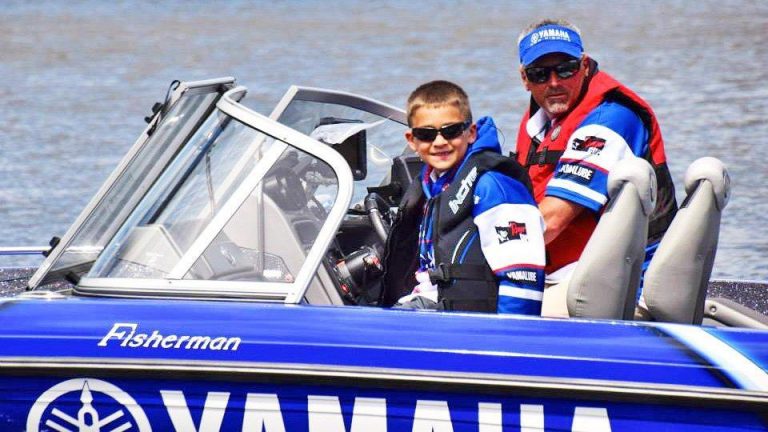 Reid helped his 21-year veteran pro angler father Ross Grothe boat 20 fish in the catch-release Pool 2 on the Mighty Miss, recording five that were good for 36.65 pounds and the win. And Dad couldn’t have been happier with his present.

Prior to Sunday, AIM Board Chairman and tournament participant Brett King had predicted that the event could very well be won in Pool 2.

“This is the first time that any major tournament circuit has been allowed to fish Pool 2 because by Minnesota law, it’s catch-and-release only,” King said. “It’s only because of our unique Catch-Record-Releaseâ„¢ format that we were allowed to obtain a DNR permit to fish it. And as predicted, it was won out of Pool 2. That’s what makes AIM unique and such a great format for anyone to fish.”

“It was a great weekend experience fishing and winning with my son, Grothe agreed. “I signed up to have fun and introduce him to the outdoors and competitive fishing and try and grow the sport but lo and behold, he’s my lucky charm. Last year, we fished the entire AIM circuit when he was seven and overall we finished fourth for Team of the Year.”

While he also learned from dad, and worked hard pitching jigs and casting cranks, Grothe said his son eventually became designated “net man,” and never missed bringing a fish into the boat. “He’s actually out-fished me at times, but for this particular tournament, river fishing can be tough and much more challenging, so we made do and won,” he said.

After launching, Team Grothe locked up to Pool 2, filling their card by 10:30 a.m. “This was a one-day tournament and you swing for the fence and it’s been catch-release fishing there for the last eight or nine years as part of a 10-year study,” Grothe said “We got away from everybody and fished some small cedar creek tributaries. We had some rain early in the week so they started pushing out some clean water and where they emptied into the Mississippi the walleyes were up on the sand feeding shelves in two to seven feet of water.

“We began pitching leeches and soft plastics with 1/4-ounce VMC jigs. I kept the boat in 11 to 14 feet of water and pitched up to two to seven feet on those feeding shelves. We’ve had real low water conditions, typically what it’s been in August. We finally got that rain and as long as they didn’t get spooked I knew they’d stay in that shallow water, and they did for us.”

The second-place team of Matthew Ernst of North Oaks, Minn., and Doug Weidenhammer of Ham Lake, Minn. earned their $2,000 check pitching 1/4- and 3/16-ounce jigs and minnows around wing dams, also on Pool 2, one of 18 in the 50-boat field that “locked up” to the pool.

“We’d been pre-fishing and getting some nice fish up there,” Weidenhammer said. “We kept upgrading until about 1:30 when we took off and locked back down into Pool 3 so we wouldn’t have problems getting back. We actually had two big fish that got off on us”. Weidenhammer surmised that they could have won it all for them had they landed them. The pair ended the day with 31.83 pounds.

“I like both the one-day and AIM’s Catch-Record-Releaseâ„¢ format,” he added. “To me all tournaments should go to this. It allows you more of a true feeling of what people are fishing for: big fish. We release most of our fish all the time anyway.”

The top five teams, their weights, and purses, rounded out this way:

Watch the video of the Grothe’s winning moment.