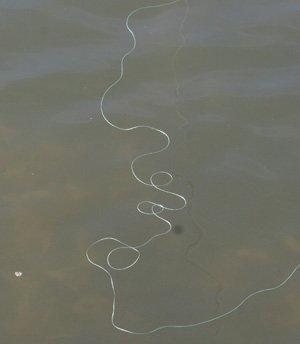 Necessity, they say is the mother of all invention, or in the case of fishing, maybe the mother of all ingenuity in rigging. Competing in bass fishing tournaments can be a pressure cooker. It forces folks to speed up, fish too fast, race from spot to spot, and often over think what needs to be done to get pressured bass to bite.

Randall Tharp made everyone look silly in the recent FLW Tour Open on Lake Okeechobee when he won the event by more than 23 pounds just hunkering down and flipping small areas on the massive grass laden fishery. His sit and soak yielded impressive catches in cold-front riddled event.

Janet Parker has been making a name for herself on the Bassmaster Open trail. She’s really focused again this year on earning that elusive Elite Series berth. She recently shared one of her “ace-in-the-hole” techniques and more importantly her J-Rig way of rigging a wacky style soft bait to methodically pick apart an area.

The J-rig is an extension of a wacky rigged soft stickbait like a Yamamoto Senko that makes it weedless and extremely effective for fishing a bit deeper than other anglers.

“I fished as a co-angler on the FLW Series and FLW Tour for a number of years and really learned a lot about how pros fish wacky-rigged soft plastics,” Parker said. “They would fish them deeper by inserting nail worms into the bait. But it limited the action of the bait so much. I thought if I could weigh the hook I could keep the action of the bait but fish it deeper.”

What she finally settled on after a bit of trial and error on the tournament trail was a 2/0 Owner Mosquito hook that she wrapped with about 1-inch of golfer’s lead Gamma tape. Since that time there has been an influx of wacky jigheads but she still sticks with the tape for a number of reasons.

“The tape has been perfect for several reasons,” Parker said. “I can quickly alter the rate of fall by adding or taking away some tape. So I can modify it on the fly. Those new jigheads you can change the head. You have to have a bunch of different sizes. And they are so expensive. So this is a much cheaper alternative. You can get 3 yards for something like $3.”

Parker employs a very vertical approach to how she fishes her J-Rig. She will skip it up to or around vertical structures like bridge pilings, retaining walls, dock posts, moorings, grass line edges and more. From there she feeds line off onto the top of the water as the bait falls and starts studying her line. She uses 20 pound braid always because she likes the added power she has to set a hook and it’s so easy to watch her line lying on top of the water. 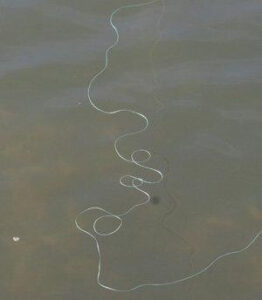 It’s a lot like fly fishing. She’s watching the line floating on the surface. If the line jumps or just starts going under a lot faster, she knows she has a fish. But if she casts it out and it sinks to the bottom without a bite, she’ll reel up the slack, then lift the bait slightly and let it fall again. If nothing bites again, then she reels up again and shoots for her next target. The only exception to this is when fishing around grass.

For submerged grass she’ll cast up to the edge of the grass line and work the bait out with lifts and drops if nothing bites on the initial cast. She’s looking for those fish suspending off the grass lines or hanging on isolated clumps.  IF it’s bank grass, she’ll cast up to the bank and flutter it across the top of the grass. Sometimes they will pounce it like a frog, but usually the bass follow it to the edge and when she kills it and lets it sink, they jump all over it.

Parker favors the rig around boats docks. She’ll use a skipping cast to get it as far back under the cover as possible and let it sink. Sometimes she’ll make 30-40 casts on a single dock to make sure she covers all the ambush points.

“It’s really effective for fish busting on the surface,” she said. “If I see one bust, especially in shallower water, I will throw over to it with the J-Rig and 8 out of 10 times, the fish will eat it.”

Another key situation for her J-Rig is long distance casting to bedding bass. She follows the theory that a bass that is not on the defensive is a lot easier to catch. So she will line up the beds and make blind casts to the beds from as far as possible. The bass are not as spooky and skittish and the subtleness of the bait really makes them attack.

“I like to scale down to a 5-inch Yamamoto Thin Senko on bedding bass,” Parker said. “The bait is so subtle and because I’m so far away, the just run off the bed and grab it before it sinks all the way down. It’s so effective on deeper beds to. I don’t have to see the fish. The rig makes them show themselves. I’ve not found any other bedding bait that they will chase out and grab before it gets into the bed like this bait and rig.”

The gear for fishing the J-Rig is pretty simple. She uses a Dobyns Champion Elite Series 743 spinning rod and spinning reel. She likes 20-pound braid with a 4- to 6-foot fluorocarbon leader. She’ll use 8 or 10-pound fluorocarbon if where she is fishing is free of grass or abrasive cover. If it’s cover that could shred the line, she’ll go up to 14 to 15-pound leaders.

The fish are reacting to the presentation; even though most anglers would consider it finesse fishing. They are not looking at the line or studying the bait.  They are seeing something that looks alive slowly sinking and reacting to it. Parker has found the fish really eat it, even on the beds.

She also uses it as a follow up bait. If a fish comes up and busts on a topwater lure, she’ll reach down and grab the J-Rig and catches those missed topwater fish more often than not. For that reason, she always has a J-rigged and ready.

Her favorite lures are Senkos, Thin Senkos and finesse worms.

“I rig it like you’re hanging the worm vertically on the short part of a ‘J’ with the hook point buried in the plastic,” she said. “This looks like it wouldn’t work, but that Owner hook is so sharp it just cuts through all the plastic and you stick them every time. It’s really weedless and falls right every time.”

Clear fisheries are the best for this technique as the bass need to be able to see it. Lightly stained fisheries will work but you’ve got to put it right on the fish’s nose. The best days for Parker have been on those flat slick calm blue bird days when fishing can be tough on clear fisheries.

She would have blanked at Table Rock last year in the Opens until she picked up the J-Rig and took off down some docks and scraped out a fish in the waning hour of the tournament. She also caught several key fish at the Arkansas River in Muskogee, Okla.

It doesn’t work all the time, but when the conditions set up for it, she thinks she can compete with anyone.

“I’m really looking forward to the Open on Table Rock this year,” she said. “Those fish will be on the beds and roaming and if we get some calm days, I’ll really catch them. I had some quality fish found on Table Rock last year before the floods hit. So I’m excited to get back there and throw the J-Rig.”