When you’re faced with finicky schooling bass this fall, be careful not to overlook a jerkbait. It can be tempting to chunk big topwaters and noisy lipless crankbaits through frenzied bass, but you’d be hard-pressed to find FLW Tour pro Tom Monsoor without a jerkbait in his hand.

According to Monsoor, there are 5 things you can do that will help you get the most out of your jerkbaits this fall.

Throw a curveball at wary schoolers

When you find a school of fish in the fall, there’s a high probability that someone else has also discovered it. This doesn’t bother Monsoor at all, however. He believes bass get used to anglers’ tricks as fall goes on, making them difficult to catch at timesâ€”if you’re not throwing a jerkbait, that is.

“After schools of bass get pressured a lot, they become pretty wise to the more conventional techniques,” Monsoor said. “You may get a few quick topwater bites on your first few casts, but then it shuts off in a hurry. When they stop eating your topwater, that’s your sign to break out a jerkbait.”

His thought process isn’t rocket science, yet so many of us overlook the simplicity of itâ€”fall bass want to eat shad because it’s what they’re hardwired to do. In Monsoor’s mind, it’s hard to get more realistic than a Gary Yamamoto Tenkuu Jerkbait.

“Bass are largely opportunistic feeders,” Monsoor said. “They want to fill their bellies without exerting much energy, which is why they can’t pass up a wounded shad. A realistic jerkbait, such as the Tenkuu, is a near-perfect imitation of an injured shad, which is easy pickings for a fat, lazy bass. Not to mention, it’s something much different than a topwater lure or a crankbait — ”they don’t see it near as often.”

Bait balls aren’t enough to warrant a cast from Monsoor. He looks for bass busting the surface before casting.

If you get the hang of locating schooling bass, it’s fairly simple and very addicting. To develop this “sixth sense”, it takes a little practice. Monsoor looks for 2 specific indications of active schoolers throughout the fall.

Truth be told, you can catch bass just about everywhere in the fall. They’re fattening up for the winter, so finding a few active fish here and there isn’t too much of a chore. To find the huge concentrations of schooling bass, however, Monsoor spends 99 percent of his fall fishing days in 2 types of areas.

Quick tip: If you’re seeing active bass on your electronics but they’re not busting, Monsoor suggests stirring things up with your trolling motor. Kicking it into high-gear can excite and disorient the shad, spurring an instant feeding frenzy.

A rule for an effective jerkbait cadence

To get the best slashing action out of your jerkbait, it’s important to move the lure with your rodâ€”not the reel. As you make sharp, downward twitches of your rod tip, use the reel only for retrieving slack line.

Your retrieve cadence is equally important. It’s easy to get in a trance and continuously use the same cadence, but the bass can get very dialed in to a specific retrieve. Monsoor has developed a method that dictates the majority of his jerkbait cadences.

Don’t be afraid of spinning gear for jerkbaits

Although many anglers have an acute hatred for spinning gear, light tackle actually pays big dividends when fishing a jerkbait around schooling bass. If he’s going to be throwing a jerkbait all day, Monsoor usually opts for a 7-foot, medium St. Croix Legend Elite Spinning Rod.

“The softer tip of a spinning rod gives a jerkbait a more natural action and it also takes a lot of the work out of it,” Monsoor said. “Throwing a jerkbait all day can turn into work very quickly, and it just seems like spinning rods are made for awesome jerkbait fishing.”

Monsoor spools his spinning reel with 20-pound braid for backing and uses a long, and I mean really long leader. This helps him avoid common line management issues that can occur in windy conditions.

“I like to use a 100-foot, 10-pound Sugoi Fluorocarbon leader,” Monsoor said. “Jerkbaits really shine in clear water and pressured bass get very line-shy in the fall. This light line doesn’t spook the bass and it also gives the jerkbait a better action.”

Fluorocarbon is also important for jerkbait fishing because of its low-stretch qualities. Because most of his bites come while the lure is at rest, his next jerk usually turns into an impromptu hookset. To promote solid hook penetration, a low-stretch fluorocarbon is essential.

Make an effort this fall to fish against the grain. As other anglers bomb big, noisy lures at schooling bass, pick up a more subtle jerkbait and throw it into the madness. Not only will you catch more bass, but you’ll also be able to pick up some bites from the bigger, less active bass that are suspended below the action. 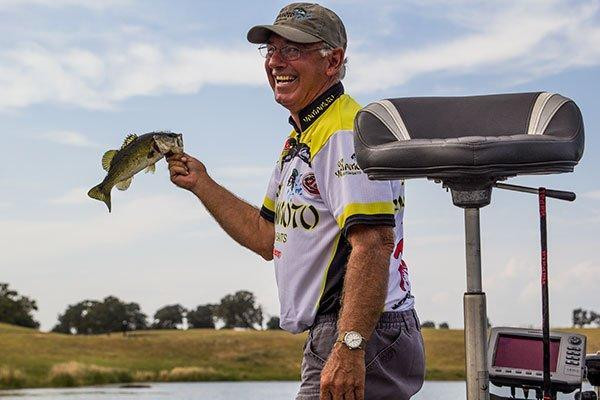 Monsoor catches a lot of quality fall bass on jerkbaits, but this one didn’t quite make the cut!

How do plan on implementing a jerkbait into your fall arsenal this year?