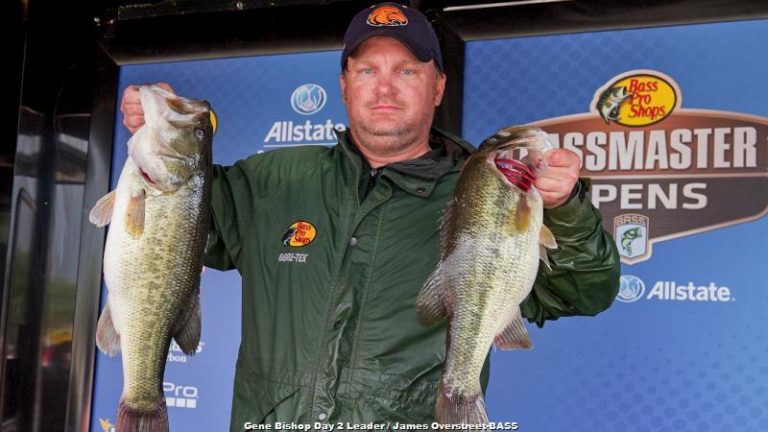 The morning broke calm with light rain. By midday, 20-mph wind gusts were kicking up brutal waves with whitecaps.

The weather during the weigh-in was blustery and switched from substantial rainfall to sunshine with a rainbow and back to rain.

The leaderboard was even more volatile than the weather. Thursday, Bassmaster Elite Series pro Mike McClelland sacked 23 pounds, 5 ounces to claim the lead. Today he brought in only two bass and dropped to 13th place. He failed to make the cut to fish in the finals Saturday.

Kevin Short, another Elite pro, in second place Thursday with 22 pounds, 6 ounces, brought in a single keeper today and dropped to 31st place.

Gene Bishop, a local angler from Ridgeland, Miss., bagged a paltry 8 pounds, 13 ounces Thursday and crash landed way back in 83rd place. Today he found the pot of gold at the end of that rainbow.

As Bishop made his way to the weigh-in area today, he stopped often to let his heavy fish bag down and switch hands. By the time he got to the scales, he looked exhausted. When the scales registered 26 pounds, 1 ounce, Bishop looked more relieved than elated to be sitting in first place with 34-14.

Why did Bishop fare so poorly in the first round and so superbly today?

“History” was a ledge where he has sacked big limits in previous tournaments.

The conditions told Bishop to fish shallow in 3 feet of water. He was about 75 yards from a community area that was being pounded by a few dozen other boats in the tournament.

“I stayed out a little deeper and intercepted the bass that were moving up,” Bishop said. “I was catching them before they could get to those boys.”

The most consistent angler on Ross Barnett’s second day was Jay Brainard. He was in third place after the first day with 22 pounds, 1 ounce. Brainard added a limit of 11-1 today, which bounced him up to second place with a total of 33-2.

“I got a lot of bites today, but they were hitting funny,” Brainard said. “I caught only five bass, and three of them came late in the day.”

Brainard feels confident he is on enough quality fish to win. The challenge is figuring out how to get a hook into the ones that strike.

Veteran Elite pro Tommy Biffle of Wagoner, Okla., sacked his second solid limit of the tournament to secure third place with a total of 30 pounds, 15 ounces. Shallow water is Biffle’s strong suit, so it’s no surprise that he is in the hunt to win at Ross Barnett.

It’s likely that Biffle is picking off bass with his trusty flippin’ rod, but he’s not talking. Fishing fans won’t hear the details until after the final weigh-in Saturday at 4 p.m. CT at Bass Pro Shops in Pearl, Miss.

For live coverage of the final round, tune in to Bassmaster.com.

The winner on the pro side will pocket $8,405 and the keys to a Triton 19TrX rigged with a Mercury 200 Pro XS and prop, a Triton tandem axle trailer, a MotorGuide X3 24-volt trolling motor and a Lowrance Elite 5 graph.

Jim Mccaskill of Brandon, Miss., leads the co-angler field with 20-12. If he hangs on for the victory tomorrow, he will be the owner of a Triton 179 TrX with a Mercury 115 Pro XS and prop, a Triton single axle trailer, a MotorGuide X3 12-volt trolling motor and a Lowrance Mark 5 graph.

Luke Clausen, a pro from Otis Orchards, Wash., won the $250 Allstate Good Hands, Great Day award for climbing the most points from Day 1 to Day 2. With Friday’s limit of 22-6, he vaulted from 139th place to seventh place.

Joel Ross from of Brandon, Miss., won the Allstate Good Hands, Great Day co-angler award of $150 for leapfrogging from 159th to 43rd place.