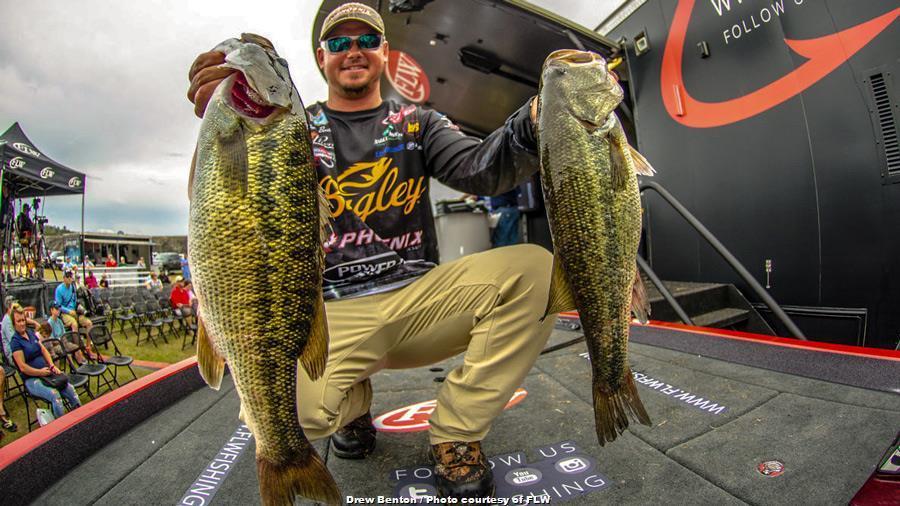 FLW Tour pro angler Drew Benton of Panama City, Florida, brought a five-bass limit to the scale Thursday weighing 20 pounds, 12 ounces to jump to the top of the leaderboard at the Walmart FLW Tour at Lewis Smith Lake presented by Evinrude. Benton will begin day two with a slim 1-pound, 3-ounce lead in the four-day event, hosted by the Chamber of Commerce of Walker County, that features 154 of the best bass-fishing anglers in the world competing for a top cash award of up to $125,000.

“I went out today and fished the way that I love to fish and that’s by looking at them,” said Benton, who was the 2013 FLW Tour Rookie of the Year. “I had around 25 fish marked on beds that I had found during practice and I caught the biggest five that I had marked today.

“I wanted to sight fish all day, but that wind got up,” Benton continued. “All of these fish are bedding really deep, so when the wind gets going you can’t see them. So, I was only able to catch them off of beds for the first hour. Then I just went fishing and tried to look for more.”

Benton said that he was able to cull twice, upgrading two of his bed fish with larger bass that came on an unnamed topwater bait around laydowns. He estimated that he caught around 20 keepers throughout the day, and his five-bass limit consisted of two spotted bass and three largemouth.

“I still have fish marked, and I was able to find a few more today,” Benton said. “I should be able to catch five pretty quickly off the beds in the morning, but they’re not going to weigh much. I’ve got some spots out deep where I know that I can catch them, and I’ve had some success on a pattern with a Bagley crankbait. I’m confident that I can catch at least another 12 to 14 pounds tomorrow.”

The top 10 pros after day one on Lewis Smith Lake are:

Shawn Murphy of Nicholasville, Ky., won the Bridgford Big Bass Award on the pro side Thursday with a bass weighing 6 pounds, 6 ounces to win the $500 prize.