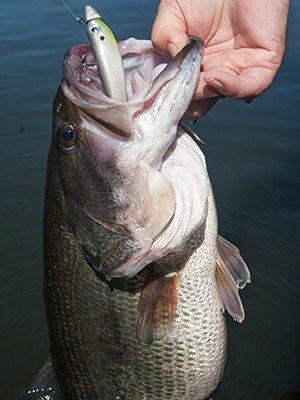 If you haven’t employed swimbaits for bass fishing, now is the time to start. The fact is swimbaits are becoming a more dominant way to catch not only numbers of pressured bass but big bass as well. What started as a big bass craze out west, has become a permanent bait for catching bass all across the country. The Sassy Shads of yesteryear have been replaced by the hollow bodied and jointed swim baits of today.

There are both hard swimbaits made out of wood, plastic and other composite materials as well as soft plastic molded swimbaits. Of the soft plastic variety, there are several sizes and styles with various swimming tails to consider.

The hard swimbait is generally characterized as having segmented bodies with at least 2 segments with joints in between, but we’ve seen as many as 6 segments on a hard swimbait. They can be made of varying buoyancies and can be either hand crafted or machined. They are essentially cast great distances and slowly reeled back to the boat. The baits can have action imparted to them with speed and starting and stopping your retrieve.

Hard swim baits are often employed in the same places you might throw big topwater plugs, or covering big areas like points, flats and humps where big bass are known to roam. The larger variety make huge splashes on the cast and that has to be considered when targeting areas where bass roam so you don’t spook fish from the best looking spots with the cast itself.

Much the same, soft swimbaits come in a variety of sizes and can be just bodies that have to be rigged on weighted hooks or jigheads or fully rigged swimbaits with lead and hooks already pre-rigged in the body. They are meant to be cast and slowly reeled back to the boat as well. But you can be a little more leiniant with the retrieves and allow them to sink a bit more without worry of big treble hooks snagging on cover like the hard baits.

Most folks consider swimbaits to be clear water options as they are very visually oriented. They are usually subtle in movement so the fish have to see them usually to elicit a strike.

Soft swimbaits will feature a boot or wedge tail to get action and kick on a slow retrieve. The wedge tail design is a little less active and features a very natural subtle swimming motion, usually keeping the body straight on the retrieve. Whereas, a boot tail forces more water displacement. Flopping the tail back and forth causes the tail of the bait to twist which adds a shimmy and roll to the body of the swim bait. It’s not to say one is better than the other, but there may be instances where one action is preferred by the fish than another. 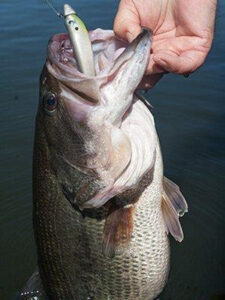 A big swimbait can be hard to cast on conventional bass fishing tackle. Some of the larger 8 and 10 inch swim baits can weigh more than 2 ounces. They require big specially designed swimbait rods, often 8 feet in length with heavy line and reels with strong gears and guts in them. You have to lob the bait more than cast it like a normal lure. With the smaller swimbaits, 7-foot medium-heavy power rods with 15-pound fluorocarbon have become very popular options. Even a 4- or 5-inch swim bait might seem small in comparison to other larger swimbaits, but they are often much bigger than conventional bass fishing lures. So size is relative and a 5 inch or 6-inch hollow belly swimbait often gets a big bite where a jig or a 10 inch worm failed to produce one.

The umbrella rig for bass

Andy Poss unleashed a storm of swimbait sales across the country when he introduced his Alabama Rig in 2009. The smaller castable umbrella rig enabled 5 swimbaits to be presented to the bass on conventional bass rods and reels and there were a ton of new swimbaits to hit the market as a result. But essentially the umbrella rig has 5 baits on a harness that you cast and retrieve like a singe swimbait. The rig excelled for several years on places like the Tennessee River for several years, but has began to wane in popularity since the craze hit.

The umbrella rig of swimbaits requires heavy tackle, usually 65-80 pound braided fishing line and a big reel for holding lots of big line.  You essentially cast it as far as possible, let it sink to the desired depth and then slowly reel it back to the boat. The strikes are jarring and are part of the allure of the rig for most anglers.

Swimbaits can be fished in clear water to dingy colored water. They are not ideal in muddy water. They can be fished on the surface to 50 foot effectively. An unweighted or buoyant swimbait can be fished just under the surface, where as one weighed with a lead weight can be fished on the bottom in 30 feet. They excel in cold water and do really well in current and warm water just the same. There’s really not a bad time to throw a swimbait. It can be a good way to go after one big bite when you need it in tournament bass fishing. We like to throw them on days that have some windy and partly cloudy skies. We don’t like really bright or really dark days necessarily. Just something to break up the silhouette of the swimbait.

We try to match the sink rate or weight of the lure to the conditions we are fishing. If we want to fish right on the bottom on deepwater, we want a heavier lure or a faster sink rate. If we want to fish over vegetation or near cover, we’re going to opt for a slow sinker or a lighter weight to fish the swimbait.

Master Swimbaits with these Articles: