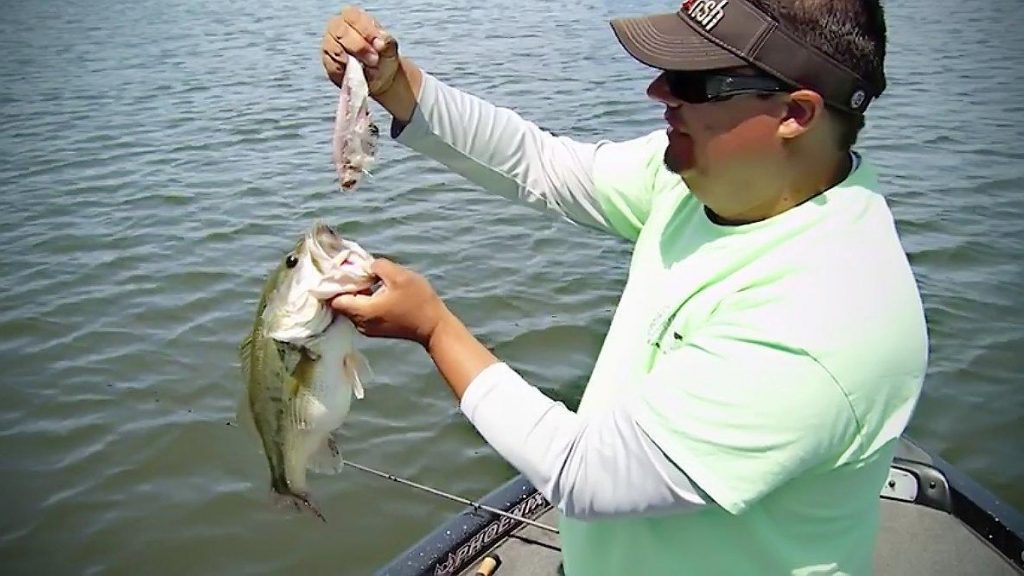 “Match the hatch” is a term that may have been coined by anglers waving a long rod for trout, but it has been readily adopted by anglers chasing just about anything else that swims and eats. It makes sense too. If you can give them a presentation that looks like what they’re already eating, you’ll probably improve your odds.

For bass across the majority of their range, “what they’re eating” consists of predominantly crayfish, bluegills or threadfin shad. Sure, bass are opportunistic and eat a ton of other things like mayflies, leeches, perch, crappies, frogs, rats, and even birds – but in most places their bread and butter is more than likely one or two of those original three.

There are exceptions though; places where bass target different forage species – and anglers that understand those unique forage options are cashing in big time.

Just ask the California swimbaiters who have been banging double-digit largemouths for years by chucking lifelike stocker trout replicas.

Or Kelly Pratt, who in 2011 dominated a BASS Open held on Virginia’s tidal James River by targeting bass feeding on molting blue crabs.

Or Jay Kendrick who caught almost 30 pounds a day on his way to an FLW Rayovac Series win on Guntersville this March by throwing a big swimbait on a 10/0 hook to bass eating gizzard shad.

The bottom line is, there can be more to “matching the hatch” than just crayfish, bluegills, and threadfin shad. The following is a rundown of unique alternate forage species, where they are found, and how you can effectively  target bass feeding on them.

By no means is this list complete either, and we’d love to hear what wild forage alternatives you have in your area that consistently produce bass for you.

Description: The gizzard shad is a large member of the freshwater herring family, native to much of the United States east of the Rockies. They are a pelagic (open water) species that feeds primarily on plankton and algae. What makes them unique is their large size, usually between 10 and 15 inches at maturity.  Although they are present across a large percentage of bass range, they are dominant prey species on many of the TVA lakes like Guntersville, Pickwick, and Kentucky Lake.

Presentations: Anglers are just beginning to understand how frequently bass feed on the bigger gizzard shad, and that understanding has resulted in some giant stringers of bass in tournaments on reservoirs that harbor healthy gizzard shad populations. Dominant gizzard shad imitators include oversized crankbaits like the Strike King 10XD, big flutter spoons, swimbaits, and bucktail jigs.

Description: Called “barfish” in Texas, yellow bass are the smallest freshwater relative of the striped and white bass. Averaging 7 to 10 inches, barfish are a frequent forage choice for bass throughout Texas and Oklahoma. They are commonly found in large schools near the bottom and can be distinguished by their yellow color and broken pattern of stripes.

Presentations: Like gizzard shad, crankbaits, flutter spoons, and swimbaits are the primary means of imitating them. A number of hard bait manufacturers now produce a distinctive barfish pattern.

Description: Tilapia are a member of the cichlid family originally native to Africa and the Middle East. Because they are good eating, extremely tough, and prolific breeders, they are often kept as aquarium pets and grown for food. Through escapes and intentional releases, they have now become established in many ponds, lakes, rivers, and reservoirs in the extreme south (they don’t survive below 45 degrees).

They are herbivores and feed predominantly on phytoplankton, filamentous algae, and small pieces of aquatic vegetation. They are deep-bodied, and generally grow to be 6-8 inches long.

Presentations: Tilapia occupy a similar niche to bluegills, but are also willing to hang out in open water. Top tilapia imitators are swimbaits, swim-jigs, spinnerbaits, and crankbaits in tilapia patterns.

Locations: Tilapia spend a lot of time feeding, and will be found wherever their predominant food source is. In lakes with aquatic vegetation, that means around the grass. In lakes like Texas’ Falcon reservoir, they are also associated with standing timber, from which they constantly scrape off algae.

Description: Amphiuma are several species of aquatic salamanders native to the southeast, where they are often preyed upon by bass – particularly in Florida. Although they have tiny vestigial legs, Amphiuma are often mistaken for eels as they swim through the water. Despite being able to reach 46 inches in length, the majority of Amphiuma recorded are only 6 to 10 inches long. Primarily nocturnal, they probe swamps and aquatic grasses for small aquatic invertebrates, fish, and crustaceans.

Presentations: Dark colored worms from 6 to 10 inches long are ideal Amphiuma imitators. Swimming worms in Florida has always been one of the most effective ways to catch bass in Florida and although countless anglers do it each year, most don’t realize that they’re actually imitating Amphiuma.

Locations: Anywhere there is shallow, aquatic grass there can be Amphiuma. Pad fields, Kissimmee grass, pennywort, hyacinths can all hold amphiuma. The bite can be particularly good during low light conditions and at night when Amphiuma are most active.

Description: Blue Crabs are one of the most culinary and economically important species of crustacean native to the United States. They inhabit marine and brackish habitats from the Gulf of Mexico all the way up the coast to New Jersey. In tidal rivers all throughout that range, blue crabs are also of culinary importance to largemouth bass. Blue crabs average 4 to 7 inches in carapace length, although most bass prey on juveniles – particularly when they are molting and have soft shells.

Presentations: Chatterbaits, swim jigs, crankbaits, and plastics can all be made to imitate blue crabs. They have a distinctive green-pumpkin, blue, and orange coloration that tidal water anglers often have custom painted or tied into their baits.

Locations: Blue crabs feed on sea grasses, and as such are primarily found around the extensive grass flats in tidal rivers. Swimming a blue crab plastic, jig, or chatterbait around scattered clumps of grass is a great way to get bit on tidal rivers.

Description: The hitch is a large species of minnow native only to central California. They average 6 to 10 inches long, but can get larger. They are similar in size and body shape to the golden shiner, and feed on insects, filamentous algae, and zooplankton. Hitch were once native to a large number of waters in California’s central valley, but have now been extirpated from much of that range – with the exception of Clear Lake, where they are still abundant and a predominant forage species for bass.

Presentations: Think of California bass fishing and you’ll probably be thinking swimbait. Most manufacturers make swimbaits in hitch patterns, and you can also mimic them with Chatterbaits, spinnerbaits, and crankbaits.

Locations: Hitch can be found in open water as well as around weed beds. They are especially common in areas of deep grass, where they can have their choice of food sources. Bass will often group up on structure adjacent or inside a large flat and wait for a group of hitch to swim by.