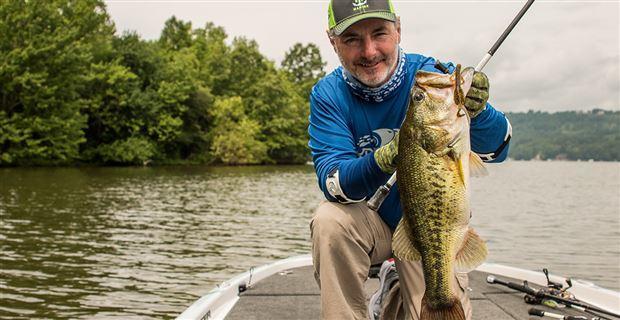 Carolina rigs have a notable reputation as a do-nothing bass fishing technique. They’re not sexy, they’re rarely exciting and they often serve as a last resort for anglers when nothing else works. When you look at all the big bass that fall victim each year to the ol’ ball and chain, however, it’s impossible to deny their effectiveness.

They work—and they work really well.

Elite Series pro Mark Menendez believes that ignoring the rig may result in several missed opportunities throughout the year.

“It’s certainly not my favorite thing to throw, but the Carolina rig can be the most productive tool in your arsenal,” Menendez said. “It doesn’t matter if it’s cold, hot or somewhere in the middle; its ability to catch big bass is simply amazing.”

Before we get into the specifics, it’s important to understand exactly what makes a Carolina rig so potent in the fight against stubborn bass.

What’s so special about it?

Carolina rigs take a fair amount of rigging and knot tying, so why wouldn’t we save ourselves the hassle and opt for a traditional Texas rig instead?

“Whenever you drag a Texas rig, the entire focus point is small and every component—the hook, weight and plastic—is on the bottom,” Menendez said. “A Carolina rig, however, has a weight seperate from the business end that’s creating a disturbance and drawing attention while the soft plastic is hovering a few inches off the bottom. This makes it much easier for a bass to locate and attack it.”

“Novice anglers can enjoy a lot of success with this rig,” Menendez said. “It gives you a constant feel of your bait and acts as your underwater eyes; you’re able to paint a clear picture in your head of what the bottom of the lake looks like. In addition, Carolina rig fish will often hook themselves. Because there’s a length of line between the sinker and hook, you don’t always feel the initial bite, which reduces your chances of a premature hookset.”

1. Drop the extra cash for tungsten

The emergence of tungsten weights has opened up an entirely new world to bass anglers around the world. This material is much harder, denser and smaller than lead which dramatically aids in sensitivity transmission. Yes, they’re more expensive; but Menendez believes they’re a worthy investment. 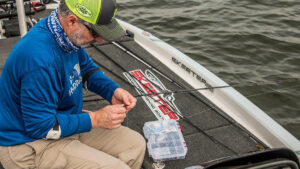 “Tungsten weights are hugely important when you’re Carolina rigging,” Menendez said. “They will give you a much better feel of not only the bottom composition, but also subtle bites. Instead of a bullet-shaped weight, I prefer the barrel-shaped Strike King Tour Grade Tungsten weights. They don’t get stuck in small cracks and crevices, which increases your efficiency tenfold.”

In regards to weight size, Menendez suggests keeping things as simple as possible. For depths up to 15 feet, he’ll use a 1/2-ounce weight and upsize to a 1-ounce weight when fishing areas any deeper.

For anglers who don’t frequently use a Carolina rig, a lot of guesswork goes into leader lengths. We’ll go through the lengthy rigging process, tie our knots perfectly and when it’s time to cut the leader, we’ll get lazy and adopt a “good enough” attitude. In order to present your correctly and get more bites, it’s essential to pay close attention to the length of your leader.

“For years, professional anglers have been beat by Peter Thliveros and his ‘Petey rig’,” Menendez said. “Essentially, it’s a 3/8-ounce or lighter Carolina rig with a short, 15 to 18-inch leader. He has won hundreds of thousands of dollars on it because it’s so darn effective.”

This shorter leader is most productive in colder water leading up to the spring spawning period. The fish are very aggressive, you’re able to fish it much faster and your hookup ratio skyrockets; if a bass bites, you’re likely to catch it.

“If you frequent older reservoirs without much cover in the water, this is an outstanding way to catch both quantity and quality. It has caught on like wildfire among professional anglers and it will often work when all else fails.”

When the spawn ends and the bass begin utilizing their deep, summertime haunts, the leader length of your Carolina rig should be adjusted and made longer. This is a tough time to be a bass, as they’re exhausted from the spawn and becoming increasingly lethargic due to high water temperatures.

“The longer your leader length, the more natural and non-threatening your presentation will be,” Menendez said. “This time of year, the bass are fairly obstinate and it can be downright tough to get a bite. When this happens, a longer leader and slower retrieve will work wonders. This is the leader length I use most often.”

It can be a booger to cast, but a 7-foot Carolina rig leader is notorious producer when fishing lakes with submerged vegetation. This extra length requires a lob-type cast—similar to an umbrella rig—and is most effective when casting to open water.

“A 7-foot leader may seem like an overkill, but it gives you one very important advantage when faced with vegetation,” Menendez said. “It keeps your soft plastic higher off the bottom and above the grass, giving the bass a much better look at your offering. It can be a hassle, but it’s certainly worth it.”

Line selection is perhaps the oldest and most hotly debated topic when it comes to Carolina rigs. With the introduction of braided line, one would assume it would work perfectly for this technique; it’s sensitive, it’s strong and it allows for rock-solid hooksets. But it is really the best choice?

Menendez doesn’t quite buy into it. 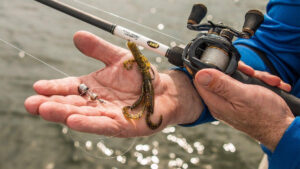 “I use fluorocarbon main line with a fluorocarbon leader almost exclusively,” Menendez said. “Braided main line is a terribly risky proposition; it’s far too easy to over-set the hook and break your leader off. If you think about it, your leader and barrel swivel are taking the full brunt of that shock and sooner or later, something is going to give and it could cost you the fish of a lifetime. You have to have enough stretch and shock absorption in your rig.”

Because most of his Carolina rig fishing occurs around hard-bottom areas adorned with jagged rocks and sharp shell beds, Menendez uses 15 to 17-pound Seaguar InvizX fluorocarbon for his main line—even in gin-clear water.

“Because your main line is so far away from your bait, you can get away with a larger diameter,” Menendez said. “The main line is taking all of the abuse as the weight dredges the bottom, so it’s important to use line that’s heavy enough to handle it.”

For his leader line, he chooses 12 to 15-pound Seaguar InvizX.

Almost everyone reading this article—including the guy writing it—is guilty of having too many soft plastics. We’ll start clicking around on Tackle Warehouse and before we know it, we’ve racked up a cart filled with crazy-looking soft plastics.

Carolina rigging, however, doesn’t need to be overcomplicated in regards to soft plastics. Just a few shapes will work in virtually every situation.

“If I could only choose one bait for a Carolina rig, it’s going to be a creature bait such as a Strike King Game Hawg,” Menendez said. “These baits are bulky, but compact enough to appeal to bass when they’re not on a major feed. Their rate of fall is also much slower than traditional straight-tail worms, which helps them stay in the optimal strike zone for a longer period of time.”

A bona fide limit-getter, small finesse worms appeal to both largemouth and spotted bass when used in conjunction with a Carolina rig. Menendez prefers a Strike King KVD Finesse Worm and relies on it heavily in water temperatures exceeding 80 degrees.

“Not many people do this, but I’ve started using oversized crawfish-shaped baits on my rigs, especially in dirtier water,” Menendez said. “The Strike King Rage Tail Space Monkey moves a ton of water and has that nice, flat bottom we talked about; it sinks slowly which keeps it in front of the bass longer.”

Perhaps one of the most versatile soft plastics in existence, it’s hard to go wrong with a Carolina-rigged stick worm when the fish are in a negative mood. Menendez uses a Strike King Ocho when he’s fishing both very cold and very hot water.

“In the summer, I want to feed the bass a filet mignon because when they finally decide to eat, they want to make it worth their while,” Menendez said. “I’ll put a Strike King Rage Tail Anaconda on there anytime the water temperatures get hot. In the north, that usually means about 75 degrees while in the south, it means the 85-degree mark.”

Carolina rigging requires a great deal of line management. Whether you’re using a long or short leader, your casting and hookset mechanics are of the utmost importance. Using a traditional 7-foot rod will cause a lot of frustration throughout the day, which is why Menendez opts for a 7-foot, 6-inch casting rod.

“The only time I’ll use a shorter rod is when I’m throwing a lighter Carolina rig around specific targets,” Menendez said. “But other than that, the longer rod makes a dramatic difference. It will increase your casting accuracy and allow you to stick the fish on a long hookset.” 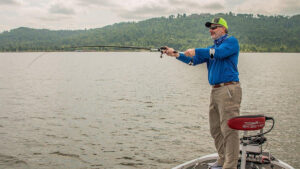 “One of the most common mistakes I see anglers make is using a rod that’s far too short. You’ll miss a lot of fish that way and it will be much more difficult to make those long casts to cover water efficiently.”

The next time you find yourself searching for a bite, don’t hesitate to pull out the “Chinese lasso”, as Menendez affectionately calls it. If you practice these tips, you’ll quickly become a believer in the power of a Carolina rig.