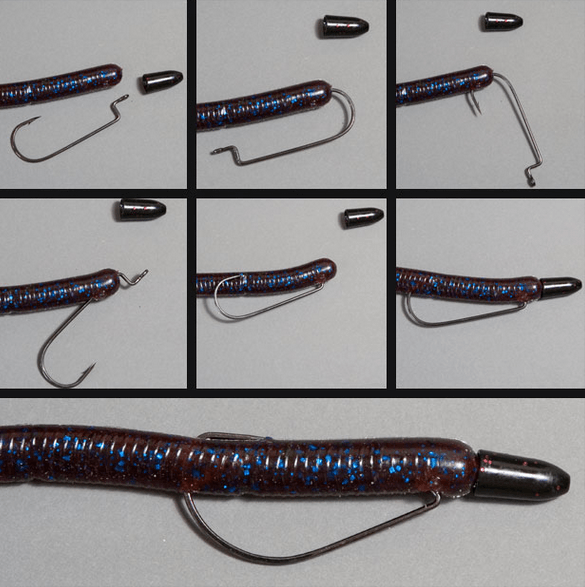 We’ve had a bunch of requests to do a piece on how to tie several rigs for bass fishing with soft plastics and when and where to fish them. We’ll start with this overview piece with diagrams on how to rig the plastics. We’ll follow up with underwater videos to show how the rigs look in the water and we’ll expand on these rigs with more advanced rigs in future pieces. But for now here are the five basic plastics rigs we think every bass angler should know.

The Basics – This is one of the first rigs most of learned for soft plastics when we started bass fishing. The rig is pretty simple and becomes second nature after you rig about 1,000 worms this way.

The rig is weedless and snagless if the plastic is covering the hook point. It presents the worm both horizontally along the bottom if a bullet sinker is added or horizontally towards the top if rigged weightless. It can also be fished vertically with a heavy bullet sinker in applications like flipping, pitching and punching. It’s the best way to present a soft plastic bait in heavy cover. Keeps the hook covered. It works in grass, rocks, brush, timber and man-made structures.

Advanced modifications â€“ You can actually run the hook point back into the side of the bait and out the other side and then lay the hook point on the side of the body just pricking the point back into the plastic. This makes it a lot easier to stick fish on a hookset but it’s not as snagless around dense cover. This method is actually called Tex-posing.

Some folks will stick a toothpick or other keeper like the VMC Sinker Stops into the eyelet of the hook to lock the plastics in place on the hook. The more your plastics tear from fighting fish, the less weedless the rig will become. So if you feel like you’re starting to snag more, it’s time for a new plastic.

The Basics â€” The Carolina rig is made to separate the worm from the weight so that the worm is a more natural horizontal freedom of movement. As you pull the weight along the bottom the worm will dance and dart and suspend momentarily behind the weight.

To tie the rig, you slide a bullet or egg sinker onto your line, then slide a bead or brass clacker on to the line behind the weight and hold them in place while you tie a barrel swivel to the end of the line. Now take a leader from 2 feet to 5 feet and tie that to the other end of the barrel swivel. At the end of your leader, you’ll attach a hook and then thread your plastic onto that hook either Texas rigged or Tex-posed.

This rig is weedless but it allows you to fish a worm faster through a larger horizontal area like a ledge, a flat, a weedline, shallow weed beds. It’s not particularly good around rocks like rip rap as it tends to hang a lot if you use a 1/2- to 1-ounce weight.  It’s a great way to feel the bottom with a heavier weight and find things like isolated stumps or clumps of weed. You can fish it fast, but as a general rule, you want to keep the weight in constant contact with the bottom. Think of it more like a slow crankbait. Just pull it a foot at a time with a side sweep of your rod; then take up the slack and do it again.

Advanced modifications â€” We’ve seen a lot of success with a very small weight like a 1/8-ounce bullet sinker and small plastics. It’s a finesse Carolina rig that can be fished on top of grass and through snag-prone cover more effectively.  Smaller finesse worms, French fries and even soft jerkbaits are extremely effective on this rig. And using a split shot with a small plastic and no swivel can be a great tool in ultra clear water.

The Basics â€” The drop shot rig presents the bait in a horizontal fashion up off the bottom but is a tremendously effective way to fish vertically. In contrast to the Carolina rig, the weight is at the bottom, and the hook is up the line anywhere from a few inches to several feet. With this rig, you can use the weight to hold your bait in one place and fish it up and down, shaking it and enticing fish to come in and take a bite.

To rig it you start by tying a standard knot to the hook but making sure to leave a long tag end from 6 inches to several feet in length depending on how high off the bottom you want to fish the bait. After you tie your knot, take that tag end and run it through the eyelet from the side the hook point is on. This will cause the hook to kick out with the hook point upward. Then Texas rig your worm onto the hook or if you prefer a small drop shot hook, just nose hook the worm just over the point.

At the bottom of your tag end, attach a drop-shot weight or a bell sinker. We like VMC’s Tungsten Drop Shot Weight and a VMC Spin Shot drop shot hook for our rigs.

You can fish it vertically in cover or make casts to deep structure and work it back slowly like a Texas Rig until you contact a piece of cover. Then stop and work it up and down trying to just move the slack and not move your sinker at all. As you put slack in the line the worm will fall. As you pull the line tight the worm will rise in the water column.

We’ve also heard of anglers attaching a jig as the bottom weight to give the fish two different baits to look at.

The Basics â€” The wacky rig offers anglers a very natural looking profile to a bait that sits horizontally in the water but falls slowly vertically and can be fished in one spot very well. It can be a weightless rig or have a ring or belly weight added to it to get it down in deeper water faster.

This is probably the easiest of the rigs to tie. Tie a hook to your line with your favorite knot and then fold the worm in half and pierce the worm through the middle.  Then after you cast, let it fall and give it a few slight twitches, then let it fall and twitch it some more. It looks like a real earthworm writhing through the water column.

This is a great technique for clear water. The fish need to be able to see the worm but it looks very lifelike. You can fish it around floating cover like docks or around bedding bass or bass relating to vertical structures. It’s hard to fish it over large horizontal areas because it works so slowly.

Advanced modifications â€“ Lots of anglers like to use O-rings to keep the bait on the hook. We actually prefer split rings sized to the size of the worm we’re using. A No. 6 or No 4 works for a lot of the baits we fish like a Zoom Trick Worm and a Yamamoto Senko. It’s as effective on a drop shot as it is rigged weightless.

The Basics â€” Really we consider this rig probably 4b as it starts as a wacky rig. But truth be told it’s the exact opposite of a wacky rig because of how the worm is displayed to the fish. Where a drop shot is a horizontal presentation mostly fished vertically, the Neko rig is a vertical presentation fished horizontally.

To tie the rig, tie your hook to the end of your line. Then pierce the worm through the middle just like a wacky rig. Now insert a lead nail weight or nail into the tail of the worm.  As you fish the worm, it will stand on end but as you twitch it, the worm will pull horizontally twitching forward while standing up vertically off the bottom.  A unique presentation for a soft plastic.

Advanced modifications â€“ Several great insert weights exist now for rigging this way. There are ball weights that insert into the tail, giving the appearance of a shaky head that you can move from the middle of the worm instead of the head of the worm. Split rings can keep the worm attached to the hook while fighting fish. Just slide the split ring over the worm to the middle and then run the hook point into the worm under the split ring to hold it in place.

These presentations give you five great ways to tempt fish with soft plastics. With weights, without weights and combined together, you can make a lot of presentations to the fish until you find the one that most appeals to the bass on that particular day the next time you’re out bass fishing on your favorite fishery.