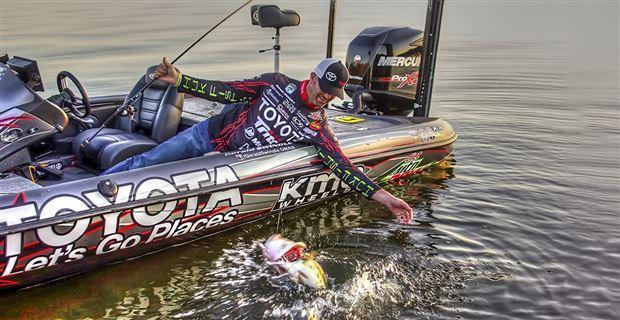 Over his 20 years in the “cast-for-cash” business, Bassmaster Elite Series pro Gerald Swindle has fished in just about any adverse condition you can imagine. From gale force winds on the Great Lakes to sweltering heat that can cook an egg on the deck of a boat, and rain from every direction (including up), he’s had to persevere and catch bass no matter what the weather gods threw at him.

Get him to make a list of which adverse conditions impact the fishing the most and you might be surprised at one of his answers: fishing calm waters.

“Rain, brutal heat, wind, those are things that primarily effect the fishermen,” Swindle said. “If you can suck it up, the fish will probably still be biting. One of the toughest ones from a fishing perspective is what I call ‘battling the calm.’ When it slicks off smoother than a baby’s you-know-what, that’s when it can get tough.”

Why does it get so tough when it’s calm out?

Because the bass get wary.

“In muddy or stained water, the calm isn’t as bad,” Swindle said. “In clear water though, it gets downright difficult. They can see everything, including you. I’ve seen the wind die and the bite shut down more times than I can count. Without that ripple on the surface to break it up, the bass are afraid to do much of anything but sit there.”

Despite being one of Swindle’s least favorite sets of conditions, glass calm doesn’t mean all hope is lost. He’s developed a 4-pronged approach for fishing when it’s calm, and has used it to record some high tournament finishes when the wind died and left his fellow competitors scrambling.

The primary impact of glass calm is that it heightens bass’ senses. They can see farther and become much more susceptible to being spooked. To compensate for that, it’s hugely important that anglers try to stay as far back as possible when targeting bass in calm water.

“Casting distance and accuracy becomes even more of a top priority when it slicks off,” Swindle said. “That’s because you need to stay as far back as possible in order to get bites. If I’m flipping laydowns, I’ll get back as far as I can and still accurately flip. The same thing applies for casting, if I’m fishing a grassline and its calm, I’m going to try to get way back off of that thing and just bomb my casts in there.”

Aside from the bass not seeing you, staying back also keeps your shadow from falling over the bass, which is something else you want to avoid any time, but particularly when the bite is tough.

Calm, clear water would lead many anglers to assume finesse tactics should be the order of the day when the surface is glass, but in reality, it’s more important to present natural looking baits than it is to use finesse.

“When it’s calm, the most important thing is to look natural,” Swindle said. “To a lot of anglers, natural may mean finesse fishing, but that’s not necessarily the case. I usually stick with what I’m doing, but just make it less obtrusive. For example, if I was catching spotted bass by burning a white spinnerbait, I’m not going to drop to a shaky head or something. I’ll just switch to a green pumpkin Chatterbait, which will look a lot more like a bluegill. In other situations it may be as simple as switching from a white Fluke to a watermelon one.”

In addition to making his presentation look as natural as possible, Swindle also speeds up dramatically when the wind shuts off – another thing that probably seems counterproductive to many anglers.

“I always tell people speed kills,” Swindle said. “If it’s calm, I’ll crank the speed up to 10 on everything I’m doing. If I’m winding, I’ll wind as fast as possible. If I’m flipping, I’m gonna go with a heavier weight and keep it moving the whole time. The idea is that you don’t want to give the fish too good a look at the bait. When it’s calm, there’s nothing to obscure the bass’ view, so you’ve got to manufacture an obstructed view by fishing fast.”

A perfect example of high-speed success occurred on day three of the 2015 Elite Series event held on Alabama’s Lake Guntersville, when he caught almost 20 pounds and jumped from 47th to 26th.

“In that Guntersville tournament, I had just squeaked into the cut, and on day three, I knew I needed to bust 30 pounds if I was going to fish Sunday,” Swindle said. “I went back into this bay that was gin clear. There were like 15 other boats in there, the wind was dead calm, and nobody was catching diddly. I told my Marshall, ‘speed kills, watch this,’ and I started burning a green pumpkin swim jig on a 7.3:1 Quantum reel. In like 20 minutes, I had 20 pounds, including a 7-pounder. You can’t swim a bait too fast for a bass, especially when it’s calm.”

Vision isn’t the only bass sense that is heightened when it’s calm. They can also hear much better. Without any wind, the background noise is dramatically decreased. Because of that, it’s important to pay attention to how much noise you’re making in the boat and try to minimize it.

“I like to make sure I blend in with what Mother Nature’s doing,” Swindle said. “If it’s slick calm, everything is really quiet. If Mother Nature’s being quiet, I want to be quiet. I’ll turn off my locators, turn the trolling motor down, and try hard to make as little noise as possible. That’s probably one of the biggest mistakes I see anglers make when it’s calm. They’re not thinking about how their entire presence blends in with the current conditions.”

A lot of anglers have commented that they believe that’s the most effective use of a device like a Hydrowave. Sure they mimic forage really well, but they mask your noises with noises the fish are used to hearing and avoiding putting them on the defensive when you move into the area to fish.

Whether your running highland impoundments or riverine systems or natural lakes, being stealthy, fishing your lures fast, making long precise quiet casts and using more natural colors will all help your success in bass fishing and other species as well on those clear calm days that other anglers find very difficult.