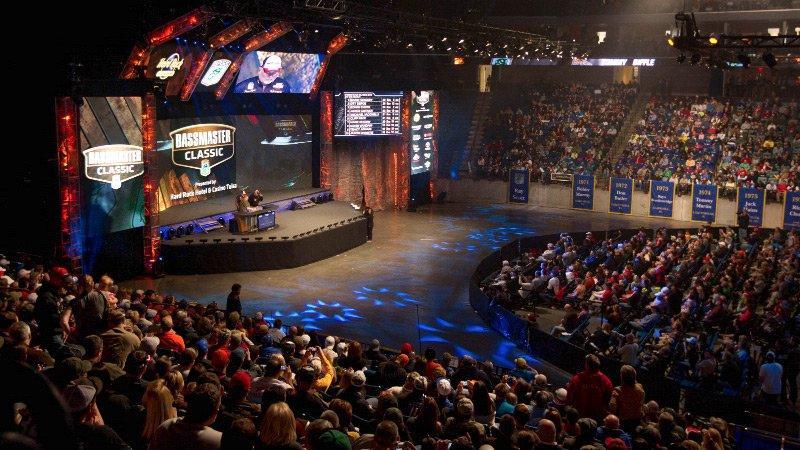 Here are the details from BASS Communications on the 2016 Bassmaster Classic:

The world championship of bass fishing — the GEICO Bassmaster Classic presented by GoPro — will return to one of its most popular destinations in 2016, B.A.S.S. and the event’s Oklahoma hosts announced today. And for the first time, the “Super Bowl of Bass Fishing” will be conducted in early March instead of February.

“The 2013 Classic was such a tremendous success, we couldn’t wait to return to Tulsa and Grand Lake O’ the Cherokees with our premier event,” said Bruce Akin, B.A.S.S. CEO. “With the support we’ve received from our hosts and our bass fishing fans throughout the region, we’re expecting an even better turnout next year.”

“We’re so excited to finally say the Bassmaster Classic is coming back to Tulsa,” said Ray Hoyt, president of VisitTulsa. “We worked our tails off in 2013 to ensure this event was a huge success because we wanted to show our partners at B.A.S.S., and other major league events, what a great place the Tulsa region is. We wanted another Classic the minute the 2013 event was over, and today we can finally say it out loud: The Classic comes back in 2016. A huge thanks to our regional partners, especially Hard Rock Hotel & Casino, for their support in making this a reality.”

“To land the Bassmaster Classic for the second time truly speaks to the staff at the City of Tulsa, Tulsa Regional Chamber and the BOK Center,” Tulsa Mayor Dewey Bartlett said. “Thanks to the hard work by many, the 2013 Bassmaster Classic was an astounding success and speaks volumes to why Bassmaster selected Tulsa for the championship in 2016. We hope the region will embrace the championship when it heads back to Tulsa as it is sure to bring more excitement and visitors from around the country and give an economic boost to our community.”

Since 2006, Bassmaster Classics have all been held the third or fourth weekend in February, but the 46th championship has been moved to March 4-6, 2016, to better accommodate anglers’ and sponsors’ preseason schedules and other industry events.

“If moving the event improves odds of good fishing weather, that’s a bonus,” Akin added. “But we proved in 2013 as well as the recent Classic on Lake Hartwell, S.C., that freezing temperatures don’t hamper the anglers’ fishing success, nor do they hurt attendance.”

The Tulsa Classic in 2013 recorded the second highest attendance in history, with more than 106,850 fans visiting one or more of the Classic venues. The attendance record of 137,700 was set at another February Classic, the 2009 event in Shreveport-Bossier City, La.

Hoyt said the economic impact of the first Tulsa Classic was $22.7 million.

“We’re proud that we could help bring the Bassmaster Classic back to Oklahoma, and to beautiful Grand Lake,” said Cherokee Nation Principal Chief Bill John Baker. “Everything between Tulsa and Grand Lake is part of the Cherokee Nation, and we are delighted to showcase our magnificent scenery to the thousands of visitors this event will bring. Most importantly, this partnership and the out of town dollars spent in northeast Oklahoma will be an economic boon to many small Cherokee-owned businesses in our area.”

As in the first Tulsa Classic, the BOK Center will house daily weigh-ins, and the Cox Business Center will hold the Classic Outdoors Expo. Takeoffs each day will be from Wolf Creek Ramp in Grove, Okla. As many as 5,000 fans braved freezing temperatures to watch the Classic anglers set out on competition days in 2013.

Cliff Pace of Petal, Miss., won the Classic championship title that year with 54 pounds, 12 ounces of bass for three days of fishing. A total of 55 anglers will qualify for next year’s event through the Bassmaster Elite Series and other Bassmaster circuits during the coming 10 months.

Eleven Oklahoma anglers — 10 percent of the Elite Series field — will be gunning for berths in the event, including Scott Ashmore of Broken Arrow, Tommy Biffle of Wagoner, Jason Christie of Park Hill, James Elam of Tulsa, Edwin Evers of Talala, Kenyon Hill of Norman, Jeff Kriet of Ardmore, Kevin Ledoux of Choctaw, Jared Miller of Norman, Fred Roumbanis of Bixby and Dave Smith of Del City.

Grand Lake O’ the Cherokees was completed in 1940, when Pensacola Dam on the Grand River impounded 46,500 acres. Previous Elite Series events there have been won by Mike McClelland and Kevin VanDam in 2006 and 2007, respectively.

Akin said moving the event to March will minimize scheduling conflicts with boat and sports shows typically scheduled in January and February, yet it will still be early enough in the year to serve as a kickoff of the fishing season. Manufacturers in recent years have been using the Classic Outdoors Expo as the venue to introduce exciting new products to the bass fishing world.