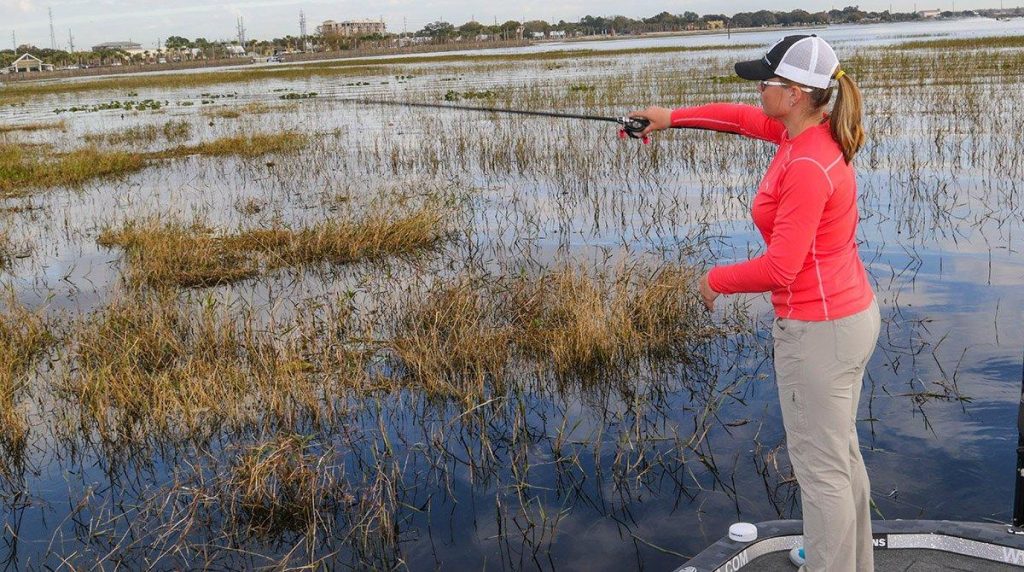 Habitat-rich fisheries often present a common conundrum for bass anglers—it all looks fishy. Well, rather than succumb to paralysis by analysis, learn to identify the areas of highest probability with better bass lure presentations to become effective at catching bass around vegetation.

To become a better bass angler in the weeds, focus on these 10 things:

3 types of vegetation to find

For tips on shallow, weedy waters from Florida to the California Delta, we asked Bassmaster Elite Series pro Ish Monroe for his top targets.

Hyacinth: Growing in thick, emergent rafts, this free-floating weed has no anchors. Therefore, it’s immediately predictable based on prevailing winds. Easterly blow, you know the hyacinth mats will be pushed into those west side pockets, canals, or land ends. So just adjust for any wind direction.

“This is some of the best big-fish cover because it creates a blanket over their heads and a clean bottom,” Monroe said. “When you have that, the fish can see your bait as far as that bottom is clean. With one flip of their tail, they can be 6 feet to the left, right, in front or behind them to eat that bait.

Hydrilla: Another invasive hated by lake managers, this rooted weed is nothing short of a bass magnet. Throughout most southern lakes, this is the must-see attraction that seldom disappoints.

“If you don’t know where to start on a lake, find the hydrilla, and that’s going to be the best place to start looking,” Monroe said. “If there’s hydrilla, most likely, there are bass around it.

“When the hydrilla reaches the surface and creates a mat, that’s where the big fish seem to be, but there’s always a concentration of bass around hydrilla. Whether it’s in open water, or it’s mixed in with another type of (weed) like lily pads or Kissimmee grass, hydrilla is always THE key.”

Look for lanes and holes in the hydrilla where opportunistic bass can hunker down and wait for their opportunities to burst forth and gobble a wayward baitfish.

Lily Pads: From lily pads to spatterdock, this long-stemmed plant with the solar panel tops is easily spotted from a distance. Occurring in vast fields, or scattered amid various stalky grasses, pads offer bass multiple benefits.

“Fresh, green pads are a great place for fish in the prespawn, spawn and post spawn,” Monroe said. “They’ll use the bases of the stems as a hard spot to spawn on, they’ll uses the pads for shelter and ambush.” 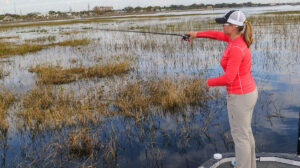 Stand out features for fishing in grass

In addition to specific types of vegetation, learn to identify the occasional sweet spots. 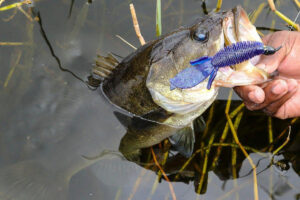 Judge each situation based on its specifics, but here’s a handful of tactics that’ll give you a solid game plan for tempting bass around shallow vegetation.

Worms, lizards and creature baits all produce bass in various scenarios. Monroe suggests choosing your plastics and rigging based on cover density.

For example, in lily pads and hydrilla, he’ll pitch a Texas-rigged Missile Baits Tomahawk worm with just enough weight to penetrate the cover. For those densely matted grass or those thick hyacinth rafts, he’ll break out the Missile Baits D-Bomb or the new Craw Father rigged on a River2Sea New Jack hook with a 1 1/2-ounce River2Sea Trash Bomb tungsten weight.

Fellow Elite Series pro Fletcher Shryock leverages a particular presentation to mimic natural forage behavior. After punching a Yamamoto Psychodad through a mat, Shryock will let the bait hit the bottom, but then he’ll slowly reel it up to the underside of the mat.

By holding the bait snug to the vegetation and slightly wiggling his rod tip, he can simulate a live crawfish clinging to the cover. If the ruse is going to work, it typically happens pretty quickly.

Rig a slender swimming style bait such as the Yamamoto Swim’N Senko or Zoom Ultra Vibe Speed Worm weightless, Texas Style and buzz it across the tops of looser vegetation. Not the deal for hyacinth rafts, but over hydrilla holes, through a scattered pad field or even along the edge of reeds, this one can get the rod ripped out of your hands.

A great post spawn option for those fish looking to recuperate with protein-rich meals that are easily picked out of the vegetation, topwater frogs should always have a place in your shallow vegetation arsenal.

Monroe’s especially fond of fishing frogs through canals or sloughs, as these arteries are typically deeper than the outside waters. Mornings and afternoons are typically his frogging prime times, but Monroe won’t hesitate to throw his Snagproof Ish’s PHAT Frog into shadow pockets during midday hours.

“That also imitates bluegill, birds, and other creatures as well as the actual frogs (in the vegetation),” he said. “That’s the great part about a frog — it imitates so many things.” 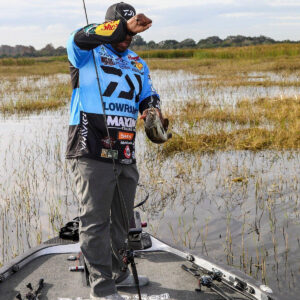