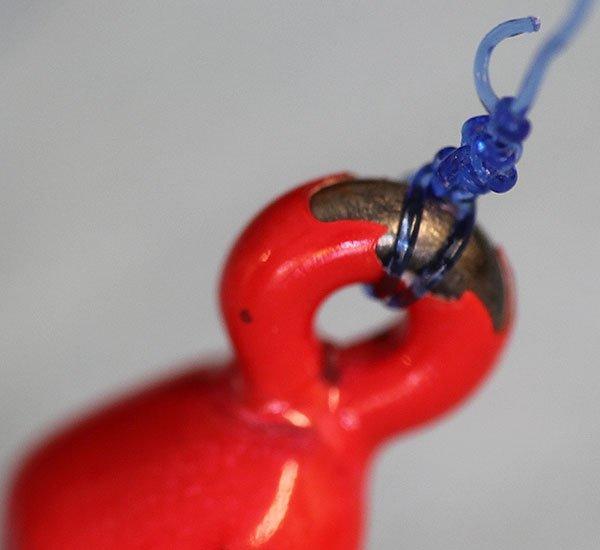 We received information of a cool new knot from Sunline. Word was that several folks in the Sunline offices back in Japan were using this knot and loved how strong it was in the breaking strength tests. So we asked them to send instructions on how to tie it and let us play with it for a while.

The knot is unique in that the harder you pull, there is no change in the tightness of the knot. So you don’t have to worry about slick braided line slipping through as the knot is pulled and tag ends are pulled in tighter to the knot. You don’t have to worry with fluoro digging into itself either because it’s not a cinch knot. It’s basically jamming double half hitches under themselves.

So to demonstrate how to tie it for other readers we built a diagram with large rope and a comparable sized object to a lure with the bigger line, in this case a gallon jug of Lucas 2-Cycle Marine Oil.

The first step is to double your line and pass it through the eyelet of your lure or hook (1). Now where you differ from a Palomar or other double line knots is you’re going to pass the loop over the lure and back around to the top again (2-4). Now that you have the loop over the lure and snugged back on the eyelet ( 5) line up your main line and tag end so that the tag end is on your right and the main line is on your left. Now take your tag end and loop it OVER your mainline and come under (6) like you’re tying a half hitch and slide it down to the eyelet (7).

Now to close the knot off, all you do is make a half hitch but before sliding it down, loop your tag end through the loop a second time (also called a double half knot). This essentially makes almost another double half hitch jam on the tag end to keep it from backing out of the knot because again this not does not cinch and bind on itself.  The result is a fairly tall knot but the breaking strength is really good and it won’t bind or cut into itself from what we’ve seen.

We’re continuing to experiment with this knot but what we’ve seen in tying it a bunch now is that you need to slide your half knots down and pull them tight and try to maintain the tension as you tie the under half hitch. When you have two half hitches jammed neatly together make sure they are tight before you start the next two. The folks at Sunline said you should do this 6 or 8 times So you’ll have 3 or 4 double jammed half hitches but we’ve found that 8 just makes too long of a knot.

Here is a video also showing how to tie this knot. Try the knot out and let us know what you think on our Facebook page or here in the comments section!