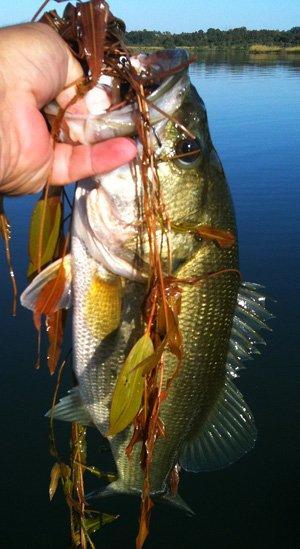 We loaded up the truck with tackle— including rods, reels, line and lots of baits for fishing deep spotted bass on one fishery and deep largemouths on another fishery. Our fishing friend and heck of a good stick on Pickwick Lake, Ricky Houston, invited us down to get away from Kentucky Lake and the 20 tournaments on the lake this weekend to do some fishing on some other fun fisheries.

The first morning we spent fishing for spotted bass. The fishing was slow but we made it enjoyable. That afternoon we decided to hit a small fishery in Mississippi for some topwater spots on spooks and such. As we launched the boat on the second fishery, it was evident there was a ton of aquatic grass to fish here. Then we saw what changed our day from poor to prophetic. Some nice sized bass began busting shad around the grass. Suddenly topwater spots didn’t seem so interesting.

We dove into Ricky’s rod locker like kids after piÃ±ata candy. “Oh please let him have two rods with braid on them,” I thought to myself. I hadn’t brought a frog rod one, but knew that would be the deal. I had however grabbed a pack of the new Berkley PowerBait Chigger Toads before I left the house. I figured if we didn’t fish around any grass, I’d leave it with Houston to test for me down on Pickwick’s matted grass bass.

That was the foresight that changed our fortunes. I quickly tied on a big offset super-line 5/0 hook to the braid and ripped into the pack of Chigger Toads. Houston worked a Zoom Fluke around the grass, I started buzzing the Chigger Toad around isolated patches of matted grass trying to clip the corners and run the little pockets and indentations in the grass.

Then, we heard the heart stopping noise that never gets old. We call ’em toilet flushes! With a big swirl of water and a thumping splash, my line went taut and I jerked back with all my might. The fish was bogged into the grass, and I just wrenched him through it until it was time to land it. A 4-pounder had absolutely gulped the green pumpkin Chigger Toad.

Now Houston and his son were scrambling in the boat looking for more toads. As luck would have it, Houston had emptied his toads out to cut down some of the weight in his boat. So the one pack was all we had. We did however find another great alternative. Houston and I fished the Chigger Toads while his son Andy fished a Zoom Ultravibe Super Speed Craw with a small weight.

We jerked on bass left and right. We missed a few because of an uncanny lack of ability to relax ourselves enough to not jerk on the huge splashes the fish were making. Man if there is anything better than fish blowing up on toads, I sure can’t think of it off the top of my head. Heck I feel my fingers typing faster as I write about it even now.

The first key is to use heavy tackle. A heavy-action rod with a flexible tip is paramount for this application. A flexing tip will give you more distance on your cast, but a heavy backbone is needed to not only set the hook on long distance casts, but also to wrench on bass and keep pressure when the bass loads up with grass on the retrieve.

The other must have option is braided line. Usually 65-pound Spiderwire Stealth or the new Sufix 832 braid is my braid of choice but I’m also anxious to try the new FX2 braid from Sunline. It should be perfect for this application. Regardless, always use 65-pound. That seems like a lot and guys have questioned us saying it takes the sport out of it. 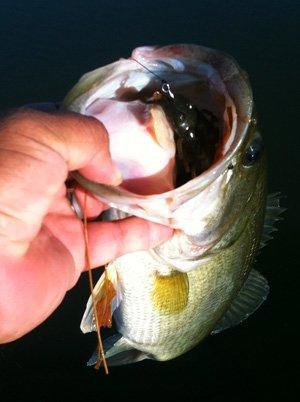 It’s simply a must have. We don’t need 65-pound line to reel in 5-pound bass. We need it to cut as much grass as possible on the hookset and to reel in a 5-pound bass with 10 pounds of grass on his head.

Trust us, without braid you’re spinning your wheels. Fluoro and mono will bend around the grass as the fish races under cover with your bait. You don’t get a direct enough pull on the line to set the hook well, and you’ll lose more fish as a result.

The other thing you need to be successful catching bass on toads is patience. So many guys react to the sound of the bite, because the strikes are often so vicious. I’ve told guys new to frog fishing to not even look at that bait and just look at it with their peripheral vision. Then when you hear the sound, simply keep reeling until you feel the weight of the fish. Then set the hook, literally, as hard as you can. You’ve got to cut the grass, stick the fish and get him coming out of the cover, as fast as you can in one hookset.

Our Take on the New Chigger Toad
The Chigger Toad did its job and caught fish. We think, however, the bait is more suited to fast retrieves. The legs are a bit too stiff for slow fishing. They don’t like to kick evenly every time with a very slow retrieve. On a fast retrieve it’s perfect every time. But we thinned the feet down a bit and cut them a little deeper to make them flap more consistently.

The good thing is the bait has a bunch of meat to it and a keeled bottom similar to a boat to help it right itself and keep it riding correctly on the retrieve. But it’s very easy to cast weightless on a big offset hook.

The colors options are very good but in our opinion, it’s hard to beat white, black and green pumpkin red / pearl. Sometimes a more neutral shad color can be the ticket too.

Overall we like the toad. The soft body of the PowerBait material was easily compressed to give us good hookups. We would, however, like to see the legs modified a bit to provide more consistent kicking on very slow retrieves. 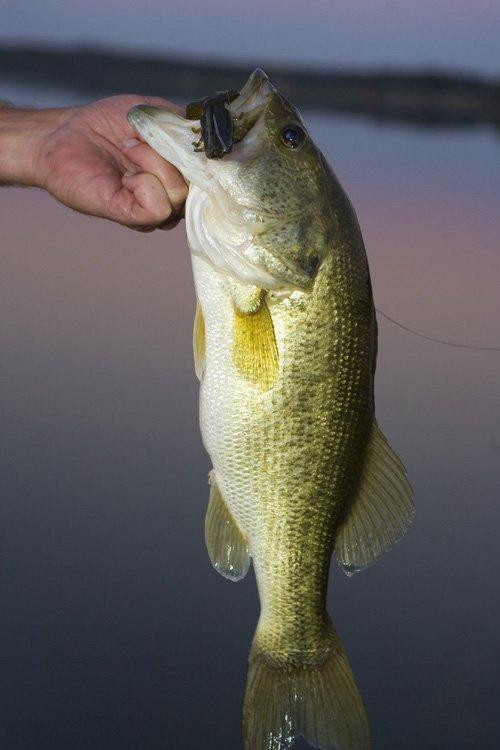