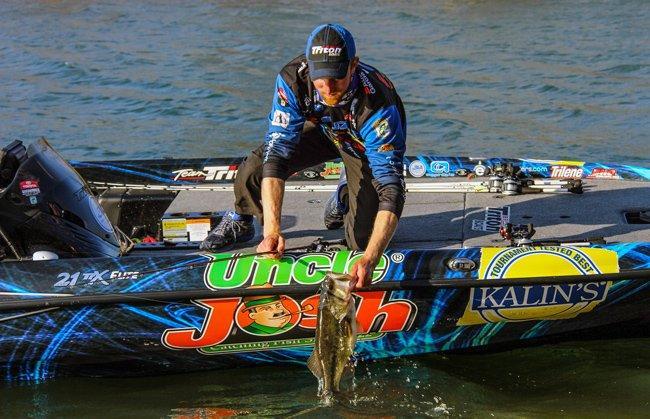 The TVA holds claim to some of the best bass fishing in the nation. Kentucky Lake, Guntersville and Pickwick can lay claim to perennial favorites of anglers from all across the country.

Itâ€™s not fair, because not only are they great lakes, but in general they arenâ€™t as seasonal dependent as other places bass swim. For most of the year, tactics on TVA lakes may change, but the fishing is still pretty good.

According to 2012 Bassmaster Elite Series rookie of the year Brandon Card, the fall transition is the one exception in that catching quality bass on TVA lakes.

â€œEvery year in September and October, it seems like weights drop off sharply all across the TVA region,â€ Card said. â€œPlaces where it was taking 20-25 pounds each day to win will suddenly see daily weights drop into the low to mid-teens.â€

This precipitous drop at the weigh-in stage corresponds with a massive migration of bass to the shallows, which leaves a lot of anglers that had been catching big stringers on offshore structure in a lurch.

Cardâ€™s best way to combat this tough fall period isnâ€™t to follow the pack and head shallow, but rather to stay out deep and be persistent.

â€œIâ€™m not exaggerating when I say 70% of the fish in most of these impoundments will suddenly vacate the offshore structure they were on all summer. That makes it really tough to resist the temptation to go shallow with them, but Iâ€™ve had my best success in the fall staying out deep and fishing for the remaining 30% still living offshore.â€

His thought process can help a lot of anglers all across the midwest.

The reason for the big move shallow in early fall is just an attempt by the bass to follow the bait.

â€œSeptember is a transition time,â€ Card said. â€œShorter days and slightly cooler temperatures cause the shad to start piling up on flats and in the mouths of creeks as they start getting ready for winter. Itâ€™s no surprise the bass follow.â€

This migration makes fishing tough for several reasons. First, the fish are on the move. Any time the majority of the bass in a lake are transitioning, it can be feast or famine.

Second, anglers have a lot of competition. The bait gets so thick in a lot of places in September that the fish just gorge themselves, and competing with real shad can be pretty tough for an angler.

Lastly, there is a lot of pressure from anglers in the shallows. Because everyone knows the bass are there, youâ€™ll often have to play bumper boats in the primary areas, which can cause them to get even harder to catch.

Count Card among the many anglers that spent hundreds of hours chasing shallow fish in the fall, only to have them move or simply not bite come tournament time.

â€œI used to be right there with a lot of those guys.â€ Card said. â€œI knew there must be some percentage of bass that stay deep, if only to avoid the competition in the shallows. So I started putting in time looking around out deep and found that if you can still locate them out there, they not only bite, but they are often big ones.â€

Likening the few remaining offshore schools to the infamous â€˜needle in a haystack,â€™ Card cautions that searching for fall bass out deep can be a very tedious process, as there simply arenâ€™t many of them. You might have to idle for hours to find a school out deep, so if you get bored looking at your electronics, this strategy might not be for you. Youâ€™ll start hearing voices and doubting yourself, but it can be well worth it.

One of the keys for Card has been to look on the very first offshore structure bass migrate to in the post spawn. Often they will hold longer on that kind of stuff in the fall. Places like the points on both sides where a creek channel hits the main channel or humps and ledges at the mouth of major creeks. 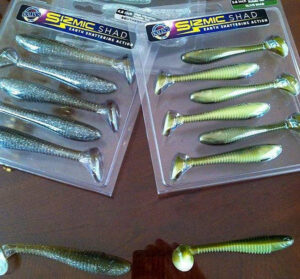 If the downside of looking for the remaining 30% offshore is that they are difficult to find, take solace in the fact that there is also an upside. Once you find them, they are usually easy to catch.

â€œThe bass up shallow are getting pounded in September and October, so when you find a school offshore, they probably have not been fished in a few weeks and will absolutely jump on your bait as it comes by,â€ Card said.

His favorite presentation for targeting a lone offshore school in the fall is a swimbait. It is definitely the most efficient way to catch big offshore bass in the fall. It has a good thump, you can use it at any depth, and when they feel it swim over their heads, they will come up and blast it.

â€œIt is the perfect size to trigger strikes from both numbers of bass, and great big ones. It also has a solid ribbed body, so it lasts on a jighead longer and resists tearing well.â€

Regardless of the setup you choose, having a reel with enough speed to catch up to a fish swimming at you is a necessity. A lot of guys fish a swimbait on a slower reel, but a lot of bass swim at you. With a single hook, if you give them any slack, they can come off. A high speed reel can better catch up to bigger fish swimming fast.

If you want to catch more bass in the fall that others are missing, review the following tips for looking away from the bank from Brandon Card: