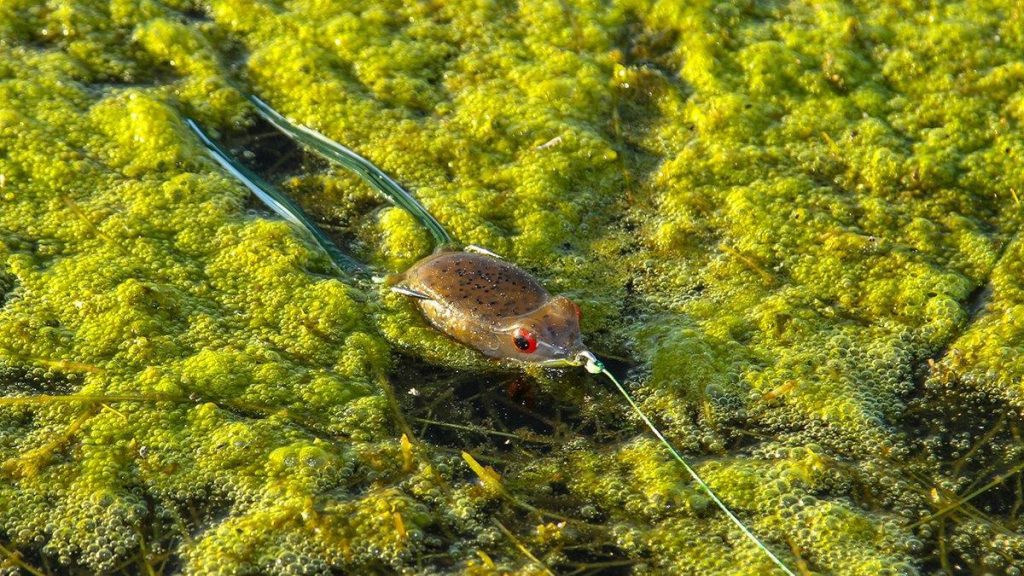 I’d never heard anyone compare fish and felines, but Ray Hanselman had a point as he described one of his key principles for successfully fishing grass mats with topwater frogs.

As we worked our way along a particularly productive mat spotted with numerous well-defined blow-up holes, the FLW pro picked apart the area with what I’d best describe as “educated” casts. Differentiating the naturally-occurring and more randomly shaped holes caused by stumps, logs or rocks; Hanselman said he evaluates his targets with deep discernment.

No doubt, there’s a lot more to frogging mats than casting a hoping. Hanselman and a couple other mat pros offered a handful of tips for more productive frog fishing.

“The fish in these mats are like bobcats — they’re sneaky. When the sun’s out, you won’t have much chance of pulling one from the center of a hole. They’ll be guarding an edge; waiting for baitfish to come across a mat corner.”

True to Hanselman’s description, we watched numerous instances of bass blasting, or at least, chasing big gizzard shad inside the mat’s mini lagoons. Each time, the assault originated at the edge of a hole and typically, from the strategic position of a semi-angled section. It seemed like those corners were subtly corralling bait into more confined areas where opportunistic bass could better target the prey. 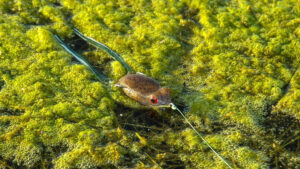 Going beyond the corner logic, Hanselman made an astute observation about casting to holes.

“Don’t cross the middle of a hole with your line when it’s sunny because those fish will see it,” he said. “That line slapping the surface will scare the fish and limit your chances of catching them on the (side nearest you).

“Once the holes ‘black out’ when the sun gets lower in the afternoon, then the fish will become active in the middle chasing bait.” 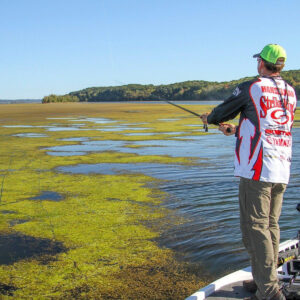 Hanselman’s all about fishing new water, but if he spots a clear frog track leading to a blow-up hole, he won’t hesitate to trace the proven course.

“Something about that spot was attractive to a fish, so there might be another one in that same area,” he said.

Essentially, when faced with a relatively fresh mat, Mason uses a strategy equitable to fan casting an open flat. He’ll pick a starting point, makes his first cast and space over each subsequent presentation by a distance appropriate for the mat’s total area.

The idea, Mason said, is to cover water to dial in productive areas and then slow down with more focused and repetitive casts. 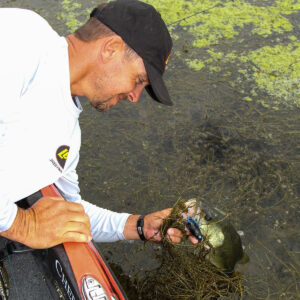 Look for points and open areas

When dialing in his target area on a vast mat, Hanselman looks for points where bass can ambush passing bait and draws or dips, which tend to gather baitfish. In the early morning hours, he’ll venture a few casts to adjacent open waters to check for bass that may be roaming and chasing shad before the rising sun pushes them into the cover.

A healthy mat — one with lots of tiny baitfish and insects — will attract ravenous bluegill. Add a thick slathering of that bubbly yellow/green algae and your “cheese” mat will also hold loads of hopping and swimming bugs characteristic to this summer/fall algae.

All this to say that the Pop! Pop! Crack! Smack! of feasting bream is music to the ears of frog fishermen. As FLW Tour pro Wesley Strader explains, all that bream activity will not go unnoticed by hungry bass, which gladly capitalize on distracted panfish.

Hanselman stresses “radio silence” around mats. Turn off your electronics and your live well, as these sounds alert fish to trouble afoot.

“Most of your bites will come on the end of a long casts,” Hanselman said, “because fish get educated on what sounds mean.” 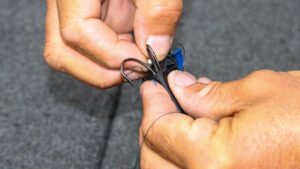 While angler noise is a no-no, Bassmaster Elite Series pro Jason Christie knows that increasing the sound of his Booyah Pad Crasher frog can help draw fish into range. Options are many, but Christie likes steel BBs because their size allows him to load the frog with noise-makers without compromising his hook sets.

Of course, the more BBs he adds, the heavier his frog becomes, and that’s no incidental byproduct. Calculations of mat impact are ever present in Christie’s mat game.

“The weight is all based on density of the mat,” Christie said. “If I throw my frog and I don’t see the mat move, I want to add more weight.”

In the light, loose cover of duck weed, Christie may use two BBs, whereas a full grown cheese mat could merit 20-25.

“You have to remember that the fish usually can’t see your frog in the jungle of vegetation, so you have to make that mat move,” Christie said. “A bass can then track the frog and follow it to a less-dense part of the mat where he can get to it.” 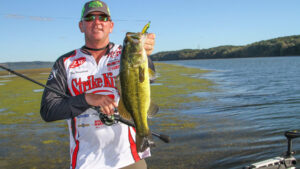