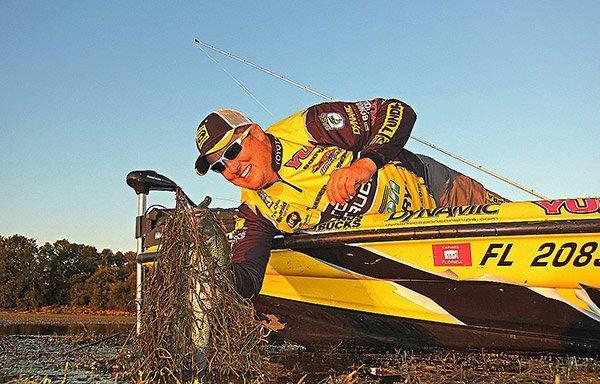 He’s won more than $1.5 million in his fairly short professional career, and he graciously provided the following simplified tips for picking apart the weeds more proficiently.

Find the haystack in the hayfield, before you look for the needle

Try using a much bigger weight

“Nobody likes to pick weeds off their lure after every cast, but a lot of that aggravation can be avoided if you’ll use a super heavy 11/2-ounce weight to rocket your lure through the pads or grass beds, as well as when pulling the lure back up through it on the retrieve. A weight that big scares a lot of anglers. I even see some Elite Series anglers trying to fish with weights in the weeds that are way too small, but I’m telling ya’ â€“ go big!”

Going big applies to hook, line and fishing rods too

“I use 65-pound braid, tied to a 6/0 hook on a heavy action fishing rod at least 7-foot long nearly all the time when I’m pitching the grass. Heavy braid is a must for fishing around weeds for three reasons. First, if you’re using that huge 1 1/2-ounce weight, like you should be, you’ll need heavy line paired to your heavy weight. Secondly, you need plenty of pulling power to free the bass from the weedbed once you get a bite. And thirdly, if you do get snagged, braid makes pulling free a whole lot faster and easier.”

Frogs above and tiny craws below

“If I had two lures for the rest of my life to fish vegetation, it’d be a Yum Big Show Craw and a Booyah Pad Crasher frog. In other words, one lure for on top of the weeds (frog), and another lure for beneath them (craw),” said Scroggins. “It’s really, really important to use a small compact craw. For starters, most of the critters that live around matted vegetation like grass shrimp and sunfish are small, so you’re matching the hatch, and secondly, you can get a 3.5-inch bait in and out of the weeds a heck of a lot easier than a big bait like a creature bait.”

Convinced you can catch ’em in the salad

“Plan a trip to Guntersville, Ala. around Halloween if your confidence for fishing vegetation needs a boost. You’ll have plenty of new fishing friends around you. It’s a very popular reservoir, but the first time a 4-pounder bust through the weeds to eat your frog, or as the locals like to call it â€“ “the cheese” â€“ your confidence will soar,” said Scroggins, reliving sweet memories of autumn days gone by on the northern Alabama fishery.

Have a ribeye with your salad

“Whether you’ve been casting a frog or pitching a craw, after a long day of fishing the salad you’re gonna need to eat. I’d recommend a big old nasty ribeye soaked in teriyaki. In less than 20 minutes you can fire up the grill and have your steaks thoroughly marinated in teriyaki. Cook it for ten minutes total. Five minutes on one side. Five on the other. And you’re good to go,” concludes Scroggins, who shares all his favorite lures and recipes at a cool site http://bigshowscroggins.com/. 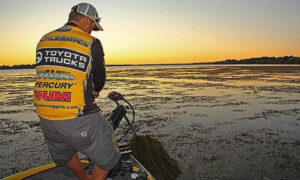