Finding the most features and fishing functionality in a depth finder without breaking the bank can be a tough job. Basic entry level units usually come with one feature or the other but typically do not bring enhanced multi-function capability. Although big screens and high level features are always the goal of most anglers, justifying thousands of dollars for one of those units can tax resources and peace and tranquility at home. Let’s face it, not everyone needs high dollar electronics.

Finding a unit that provides clear pictures, easy to use features, GPS, and wide-spectrum CHIRP DownVision can usually mean spending $1000 or more on a unit. Water temperature capability is a must for most anglers too.

Raymarine has taken fishing electronics with advanced features and packaged it with an attractive price point in their DragonFly line-up of sonar devices.

Features of the DragonFly 5 Pro 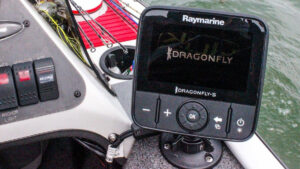 I recently got to install a DragonFly 5 Pro on my Ranger 106 project boat and was impressed not only with the ease of the install but more importantly how many features were included and the clarity of their DownVision sonar. Built-in mapping is very accurate and the ability to move between screens was as simple as tabbing through icons with a single button.

The DragonFly 5 pro comes equipped and packaged with Navionics micro-SD cards. Although I have gotten used to larger screens, the 5-inch screen is clear due to its 800X480 pixel resolution. Larger screens are available, but the price increases with the larger size screen. Honestly, at the console on my little boat, it’s perfect. 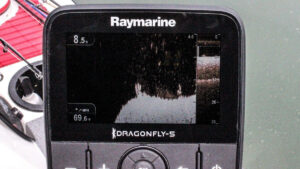 Dual channel CHIRP sonar allows anglers to differentiate fish from brush and rocks and the very clear CHIRP Downvision accents sonar with a super sharp LCD picture and unreal separation for killer vertical pictures. Defining objects and waypoint mapping of your favorite pond or lake is easy with the DragonFly 5 Pro.

Simply put the clarity makes the smaller screen manageable even for accomplished anglers. Equipped with both CHIRP sonar and DownVision as well as Wi-Fi capability called Wi-Fish to allow anglers to utilize their smart phones and computers with the unit that retails for around $550. 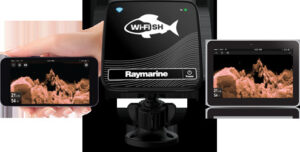