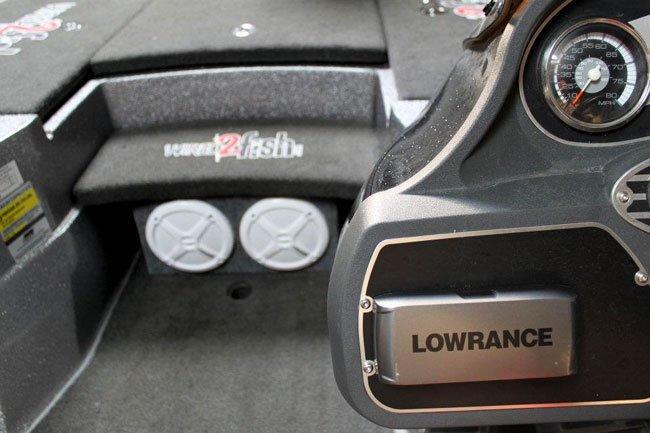 I once found myself in the midst of a bull whip jungle on Lake Okeechobee, to my knowledge miles from any other mammal with opposable thumbs. After about an hour of eager exploration, the available water had gotten too shallow for me to fish and too narrow to turn around. I was just taxiing along as fast as 36 volts could take me, hoping to find open water or at least a deep enough ditch to cover the outboard prop. I thought to myself this would be a great place for the filming of Deliverance 2 and began to listen closely for the dreaded sound of banjos. It sure would have been nice to have a little something to drown out that deafening silence.

Although this is a bit of a dramatization, it is just one instance in which the versatile Lowrance SonicHub would have come in handy. I am a pretty avid competitor and thought initially that music didn’t really have any place on a bass boat. It would just cloud my senses and prevent the interpretation of nature through sound that is often key to fish catches. After all it’s hard to hear a 5-pounder splash behind the boat with Sweet Home Alabama blaring from mid-deck.

However, after running my boat with the SonicHub for about a month now, I highly doubt I’ll own another boat without it. For starters, the SonicHub does much more than just play music, although it does that very well. It can also be used to play AM/FM radio and SIRIUS Radio.

The basic SonicHub package comes with an iPod dock that can be placed in dash for easy access. Once your iPhone, iPod, MP3 or flash drive is connected to the dock you can close the waterproof front cover and control your music directly from your Lowrance HDS display.

AM/FM and SIRIUS Radio controls are also available through your display so that you can check the weather or listen to your favorite college team play football while out on the water enjoying some fall fishing. The days of lugging around a boom box powered by D batteries are a thing of the past, and may I say, good riddance.

I’m not typically a do-it-yourself guy, so I had a little help with the technical side of the installation. Running the wires is your typical headache since most boats weren’t really built to work on. However Lowrance did simplify the madness making it only necessary to thread the needle a few times.

There is one USB wire that runs from the back of the dock to the actual SonicHub. This wire is basically the same as the auxiliary iPod cable that is used to attach your iPod or iPhone to any auxiliary input. However it is conveniently imbedded in the back of the dock with the opposite, USB end, left free to be run through the boat and attached to the SonicHub which I mounted in the rod box in front of the driver’s console. 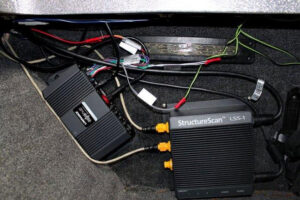 The 2 marine-grade 6.5-inch speakers can be installed in the fiberglass walls of the boat using an electric saw to cut two holes according to an included template. However, if you have room and are like me, who nearly faints at the idea of cutting into my boat, there is an alternative.

I built a small speaker box that sits snuggly underneath the step that leads from the bottom floor of my Ranger boat to the front deck. This allows easy access to the two speakers provided they ever need maintenance and allowed me to drill one small hole in the fiberglass to feed the wires through as opposed to two holes half a foot in diameter.

The box was built from 3/4-inch treated plywood and outdoor carpet that I picked up at my local hardware store. If you are a stickler for detail, matching carpet could be ordered from most boat dealers. One thing to note here is that I left the back of the box open so that I can get to the speakers if need be by simply unscrewing the two knob tipped bolts that hold my step in place. I also didn’t attach the speaker box to the boat in anyway. Instead I made it fit snug so that the friction from carpet to carpet and the pressure of the step would hold it in place.

Once all the installation of hardware is done you need to program the HDS unit to recognize the SonicHub. Upon powering on the unit, a popup guide should appear on the HDS display. If it doesn’t there are detailed instructions in the accompanying operation manual that will help you get the SonicHub setup started.

What’s neat about the operation of the SonicHub is that it takes up hardly any space on the screen. If activated it appears in a small row along the bottom of every view. Pressing and holding the Page button on the unit will move the yellow box that highlights the active part of the screen. Doing this until the box is around the section that shows the SonicHub details will allow you to control the Hub. 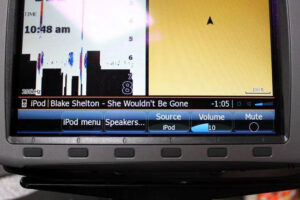 Once that section is highlighted, you will find that there are several ways to enjoy your audio options. You can select the input source from a list including iPod, MP3, USB, AM, FM, AUX, Mic, and Sirius. Once the source is selected the operation is pretty simple. For instance, if you place your iPod in the dock and select iPod, all of your music information is available right there on the HDS screen including playlists, genres, song titles, artist and everything else you would see on your iPod screen.

Another neat part of the iPod usage is that the iPod dock is capable of housing everything from an iPhone to and iPod Nano. There are multiple iPod dock sleeves that come with the SonicHub and can be inserted, removed and interchanged to make the iPod dock fit whatever particular Apple product you have. There is also an available USB drive internally mounted in the dock for a flash drive or other MP3 connection.

One thing that I worried about initially is the drain that this added output would have on my cranking battery and I must say that I haven’t really noticed any additional impact. One reason for this is the smart thinking on Lowrance’s part that allows the user to play audio while the HDS unit is in standby mode. You cannot control the SonicHub until the HDS unit is reactivated but if you are listening to a game or put your playlist on shuffle this feature will allow the unit to play audio without being too big a burden on your batteries which is a huge selling point for me.

With so many capabilities and a user friendly interface, I have to say that this is a smart buy. And at around $300, it’s pretty economical as well. Being able to enjoy a little music or a ball game while also partaking in the great outdoors could be the perfect marriage between technology and mother nature. Also having the ability to keep an ear out for changes in the weather could possibly save your life. So in whole I’d have to say that, although the installation requires a little sweat and complication, the overall investment is well worth it.

To learn more about the Sonic Hub from Lowrance, visit Lowrance.com.
Next
Contact Us