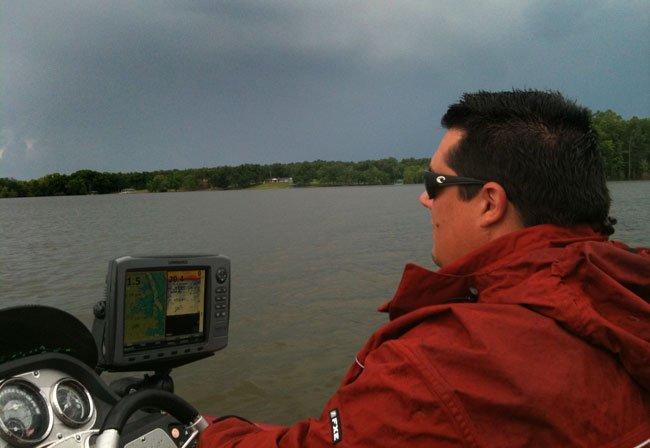 I’m sitting at my desk writing and working on photos and hoping the power doesn’t go out with every crack of thunder and flash of lightning that seems to be in my front yard. When the thunder really booms and cracks like it is now, it’s a bit spooky. That spookiness, however, is compounded when you’re out in the middle of the lake, miles from your truck and boat ramp.

I fished a tournament in April and made a big run. I ran more than 50 miles one way. When I left out the weather was very pleasant â€“ no wind, overcast but warm and calm. That all changed throughout the course of the day. The wind picked up, the skies kept getting darker in the distance and we decided late in the day to fish as long as we could and then make the run back as quickly as we could.

We left ourselves about an hour as we had worked back up the lake towards the launch throughout the day. We ran hard all the way back and when we turned the last big corner, the waves were much bigger and the skies were pitch black ahead of us. We didn’t have time to stop and put rain gear on so we booked it across the lake hoping to beat it.

We failed. As we pulled up to the check-in boat, the winds were blowing 50 mph and it began to pour down rain with a 25 degree temperature drop. We got drenched and very cold. We struggled to put our raingear on as the wind was so hard and the rain was so strong. We were drenched inside and out and shivering in the cold. We later found out that a tornado had touched down briefly on the outskirts of the lake and then the lightning started.

I sat in my truck a while before bagging my fish and heading out to the bump tanks. I needed to collect my composure and I was able to find a dry shirt to at least wear under my soaked raingear.

I finally got weighed in and of course after you’ve done the deed in a tournament you have some time to reflect. I was spooked to say the least hearing guys talking about seeing the tornado as they were coming in and getting caught in bad lightning and wind. How rough it was for the later flights, etc. The whole thing was unnerving. 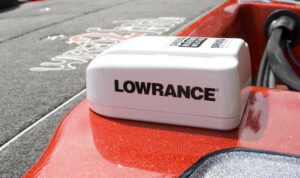 The next week I got the Lowrance LWX1 kit and ordered a subscription to Sirius Satellite Weather. As luck would have it, I had recently swapped electronics and still had a hole in the back of my Ranger Z520 that worked perfectly for mounting the LWX1 antenna. I then used an electrician’s fish tape and pulled the wires to my console where I then mounted the LWX1 Router. Then I powered the router on my jump blocks under the Ranger’s dash and connected the Ethernet cable to my LSS1 Structure Scan module to connect the system to my two Lowrance HDS units.

The whole process took me less than 45 minutes. Then I called up Sirius with the number supplied in my manual. I gave them my information and my product serial number and I was activated in a matter of minutes. 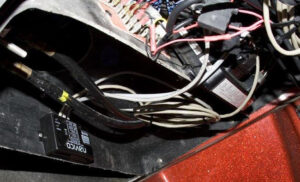 Then I went into my units and activated Weather through the menu options and was able to get the overlay up and working in no time.

I’m still learning all the settings but it’s already come in extremely handy in two outings this spring. I was about 10 miles from the ramp on one outing and could see the skies darkening on the horizon. I pulled up the weather overlay and zoomed out and was able to track the wind speed and direction, lightning strikes, look at the forecast for the area and track the movement and intensity of the precipitation. I was able to plan how soon I needed to leave to move to a safe area.

We fished right up to the last minute. Then I hit the gas, ran to the ramp, loaded the boat on the trailer and the moment I got into my truck, it poured so hard I was unable to drive because my wipers couldn’t clear the sheer volume of water off my window fast enough. It was crazy how accurate and how much extra time I squeezed in before knowing I had to run.

The HDS 4.0 updatehas made the updating of the weather data much faster. I like to set my alarms for about 30 miles out unless I’m way down the lake, then I will set them further ahead. It’s nice because your graph will chime at you if a storm pops up in the radius or a lightning strike.

Where it has really become invaluable to me is at night. During the hot summer months we fish a lot of Tuesday night Jackpots. Those jackpots run from 6 pm to 10 pm and you spend a good bit of time in the dark. It’s very hard to see wind speed or coming rain with no sunlight. I’ve been caught under a tin boat house in a gnarly lightning storm before and I didn’t much enjoy that evening of fishing.

It’s also become invaluable to me in tournaments. I can get an accurate read on the wind speed and direction and I can know what areas are protected, which wind blown points will be the strongest. I’ve also been able to make calculated decisions on where it’s overcast or where it might be calm for an early bite and then run to other areas based on wind direction, sun, rain and other variables. 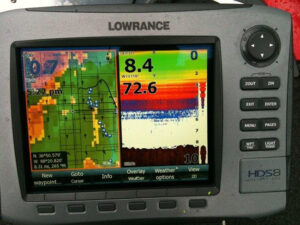 I live on a big lake and weather can be your enemy or it can be an asset if you’re able to plan around it on the fly. Quite frankly the weather folks in our area are hardly right, they often have no idea when a major weather shift is going to happen and you can sometimes be caught with your â€¦ umbrella down.

The Sirius Satellite Weather activation was very easy and the install of the Lowrance Weather hardware was also a breeze because I had most of the existing electronics already in my boat to connect it seamlessly. It’s been a great investment and given me a lot of peace of mind. Which when I’m fishing, I don’t like to be stressed out about uncontrollable variables. I feel like I have a lot more control of working with the variables now that I have this module installed. We’ll talk more about how we’re specifically applying it to our fishing to make our time more productive and how we don’t have to run home anytime it looks like it might get bad.

Here is a great video that details a lot more of the features of Lowrance Sirius Satellite Weather with Wired2Fish’s Scott Glorvigen.