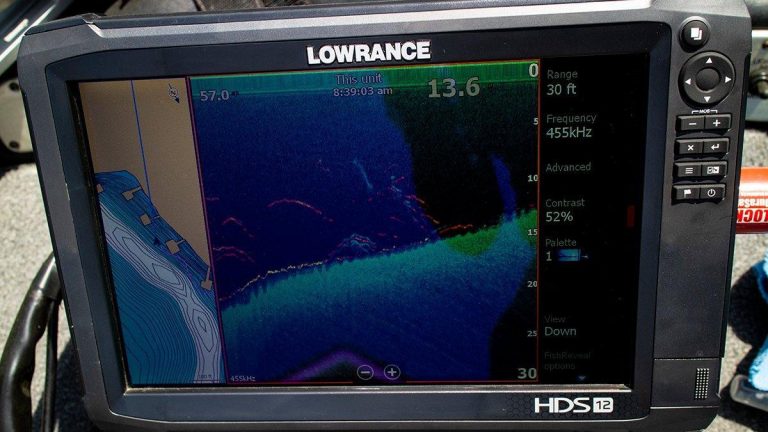 I’ve been using Lowrance HDS fish finders since their very first generation. I started with an HDS 8 Gen 1 unit and LSS1 Structure Scan module. I upgraded to Gen2 units, then LSS2 Structure Scan. Then 3D Structure Scan. Then HDS Gen 3 graphs. And finally, Lowrance sent me the HDS Carbon 16 and 12 units last summer to test, and I’ve been running them now for about 10 months with the Lowrance Structure Scan 3D module at the transom and an HDI transducer on the trolling motor.

So I thought I would give you my run down of these units and some of what I’ve found with the new Carbons with 3D Structure Scan if you’re considering upgrading units.

For me the struggle with the advances in marine electronics technology like Down Scan, 3D Structure Scan and now software updates like FishReveal and high definition imaging is the same struggle you have with any piece of technology. Whether it’s cell phones, laptops or fish finders, having enough horse power in the units to run all of the new advances in software and keep the units responsive is always the biggest challenge. You can find technology to run it but it’s usually very costly. But that’s how it is with technology. You can have most incredible new software, but without the power to run it, your device is a dud.

The new Lowrance Carbon units give you a ton of processing power for clearer pictures and faster performance. I found them to be noticeably faster than my previous HDS Gen3 graphs that I ran on the same setup. I would sometimes see a delay in switching screens or altering settings with a lot of contour features on the screen or a network map that was constantly updating from a remote unit would sometimes get a “hiccup” because the processor was catching up with the amount of information I was sending to the unit at once between mapping and scanning. But now I don’t have any of that with the Carbon units.

The HDS Carbon screens themselves are greatly improved over early models. They use a superior glass and incorporate a SolarMAX HD screen to give you the most detailed and viewable picture even in bright sunlight from just about any angle. And it’s really nice for me, because instead of running two units, I’ve mounted the HDS Carbon 16 in the dash of my Phoenix 920XP with the help of a Precision Sonar bracket and just split the massive screen to get the power of two units in one screen. While I can adjust the screen angle, I never have to. I just set it up initially where I had the best viewing angle and haven’t messed with it thanks to these newer screen technologies.

The HDS Carbon 12 is mounted just in front of my trolling motor pedal with a Precision Sonar Bow Mount bracket.

The interface on the HDS Carbon is not only intuitive but easy to navigate and operate with either touch screen controls that mimic how you use your smart phone or with buttons and cursor joysticks to the right. The screens move in and out quickly on both my Carbon 16 and Carbon 12 units. I love this because I am switching screens around and adjusting my contrast and sensitivity constantly to get the best pictures as the water I am in changes. Having a responsive interface alleviates so much of the frustration with trying to find fish on new fisheries or on long days of weather. Also splitting the screen is sending a ton of information to my unit as it communicates with a Point-1 antenna, map card, 3d Structure Scan module and an in-hull transducer simultaneously.

I run both a Point-1 External antenna and a map in one unit that I share between the two units via Ethernet. I have a shoot-thru hull sonar transducer in the bowels of the boat, a Structure Scan 3D module in the back and an HDI transducer up front. That is a lot of information being transferred between the units, and the seamless updating is what I value the most in the Carbons (save maybe for the sheer size of that 16-inch screen).

With these units you can also share what the front transducer is seeing with the back unit and vice versa. I will admit I don’t use this feature a lot. But I consider it the perfect backup plan for if one unit or transducer went down you could do some shifting around and get signals in front and back. I do know some crappie guys who run an electric steer trolling motor and compare what the front unit sees to what they are seeing in their seat and controlling from the console on their Carbon units and love it.

I’m getting a really great picture on my Carbon units, but I spent a lot of time scanning, adjusting the angle of my Structure Scan transducer and bumping up and down sensitivity, surface clarity, noise rejection, colorline and changing color palettes back and forth. I love the new greenish-blue HD color palette added with the latest update. It makes the FishReveal sonar signatures show up really well overlayed over the DownScan screens.

I employ the FishReveal feature on the Carbon units mostly when looking at brush and trying to find fish in and around cover.

Generally I bump my surface clarity to high and noise rejection to medium or high and then bump up my sensitivity or colorline settings. You have to play with it because different lakes and rivers have different levels of sediment, sizes of baitfish, and even your prop wash will show up more in one lake than another. So there is no one setting that makes it perfect. You have to go back and forth between deep and shallow water and get that good detail in your Carbon screens.

I have learned to use DownScan a lot more on my Carbon units. Back with the LSS2 and Gen1 and Gen2 units you would see fish in that dark space of SideScan directly under the boat. Since the introduction of 3D Structure Scan, the target separation changed in that void area under the boat on SideScan while the detail in the bottom drawing out to 200 feet got greatly enhanced and magnified. And you see fish better than ever out to the side now.

But it has made me use DownScan a lot more when I’m idling directly over a likely fish holding spot and wanting to see fish right below me in that space of water between the boat and the bottom.  The detail on DownScan with the new FishReveal is greatly enhanced, even if you leave FishReveal turned off. So I feel like I’m getting the best of all worlds with a split screen that has my map, DownScan and SideScan and using FishReveal to give me CHIRP sonar returns in my DownScan screens.

With the new Carbon units, I have a lot smoother operation but the last update of FishReveal really shows off the incredible new level of definition on the Lowrance HDS Carbon units. I’ve already talked with engineers and their internal testers, and they assure me the stuff coming down the pike for the Carbon units is just as exciting. But I’m happy as can be with the picture I’m getting with the Carbon units.

One caution I would advise with these bigger units is to upgrade your battery. I was having a little suspect issue when I would turn the key on my motor where the HDS Carbon 16 would blink off and turn black/white/grey. It turned out my 4-year-old battery was showing full charge but was not delivering consistent power to this extremely powerful graph at all times especially when something else in the boat needed juice. I replaced the battery with a big AGM battery, and the problem was resolved.

The Carbon units have two microSD card slots which is nice for being able to save screenshots, load multiple maps and switch back and forth to be able to see subtle differences between mapping software.

They also come with a hard shell Lowrance cover that locks on tight, and I’ve never had one fly off even towing the boat 8-10 hours to other fisheries. I never have to worry about something damaging the screens with these covers on them.

I had my system installed by the guys at HITEC Outdoors and had them run both a NEMA 2000 backbone to my HDS Carbon units as well as Ethernet them both together to share waypoints, talk with the Point-1 antenna and pass mapping information from one unit to the other.

If you’re in the market for a new fish finder / chartplotter, I can definitely recommend the HDS Carbon units. You can find them online at Tacklewarehouse.com and Lowrance.com or at local retailers that offer Lowrance electronics. They offer incredible detail, fast uninterrupted performance and super easy interfaces on the best looking screens.

I’ve fished some with the HDS Carbon 7 and 9 units on our other Wired2fish boats. And I’ve spent a lot of time with the HDS 12 and HDS 16 units over the last 10 months on my own boat. I will have some new videos to go with these many screenshots all throughout the year and I try to answer all the questions that are sent to me individually regarding the units as I get them.

Winding back and forth over a road bed

Fish on a roadbed with a drain running under the road

Asian carp covering the bottom of a bay in the winter 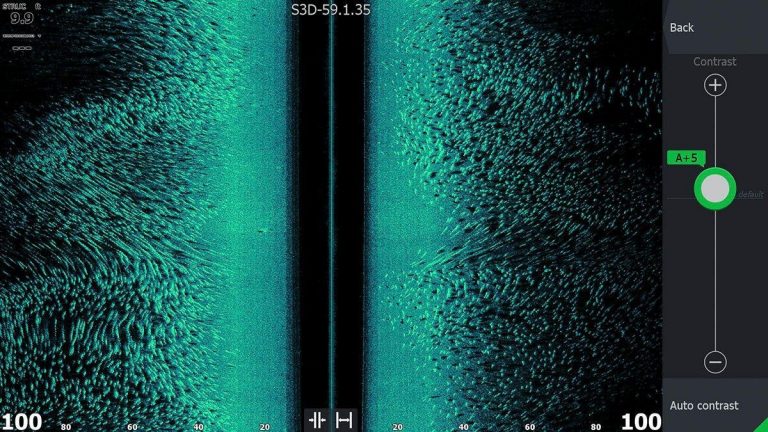 A group of fish on the bottom off a break 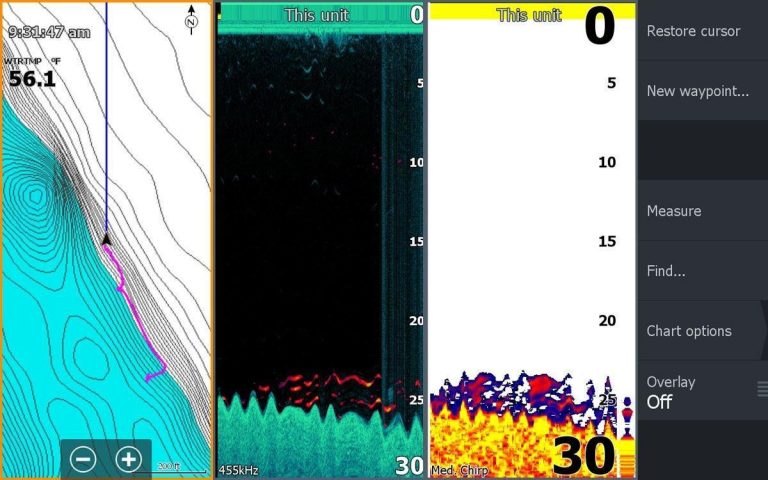 Zoomed in shot of fish hiding in a brush pile 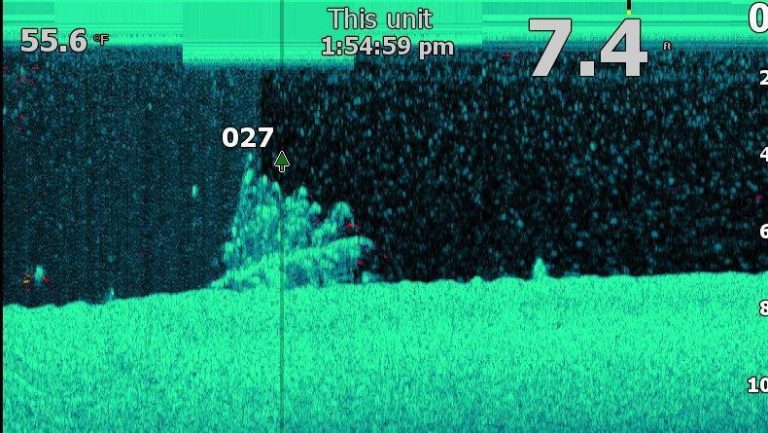 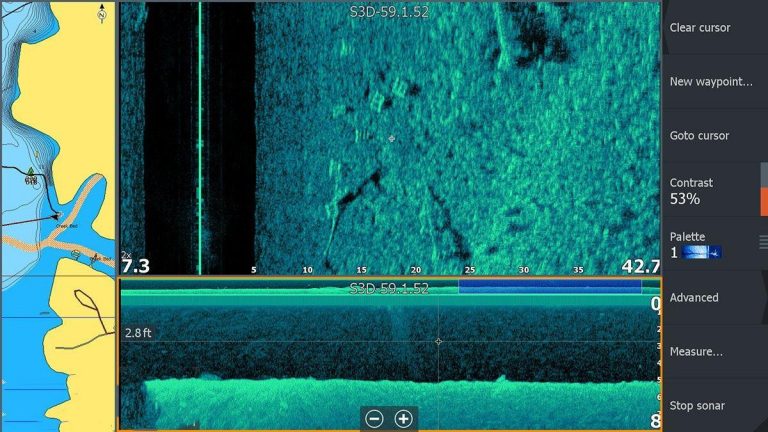 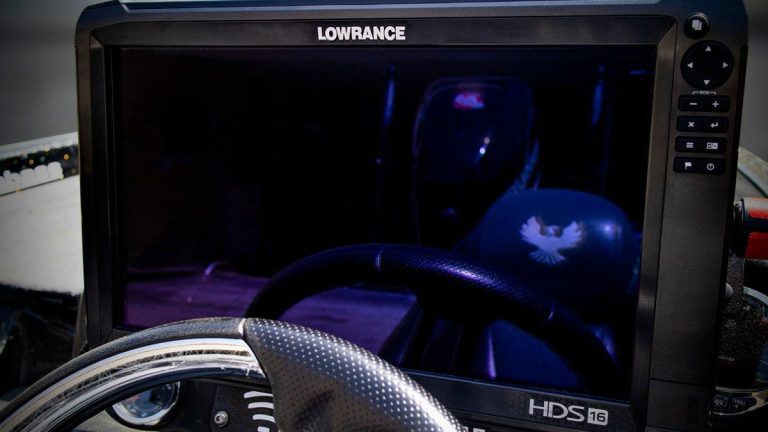 The boot up takes about a minute on these units 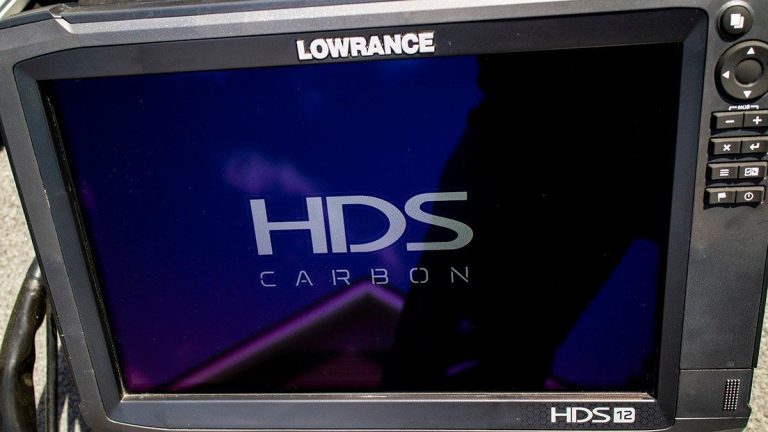 The Carbon 16 has power, connectivity to transducer, ethernet and NEMA 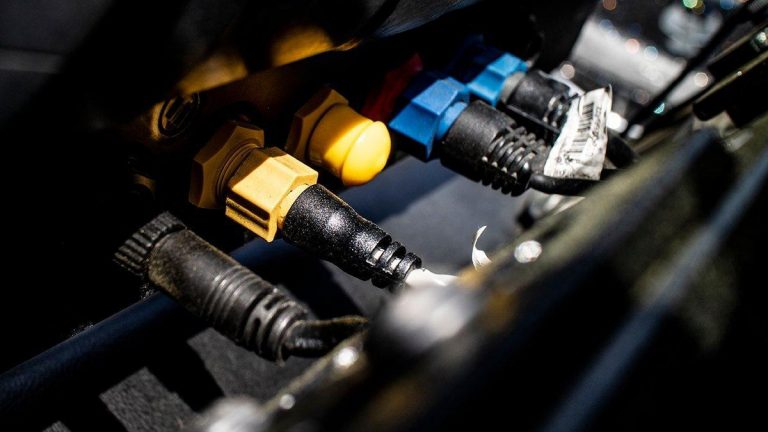 The HDS Carbon 12 has the same connections 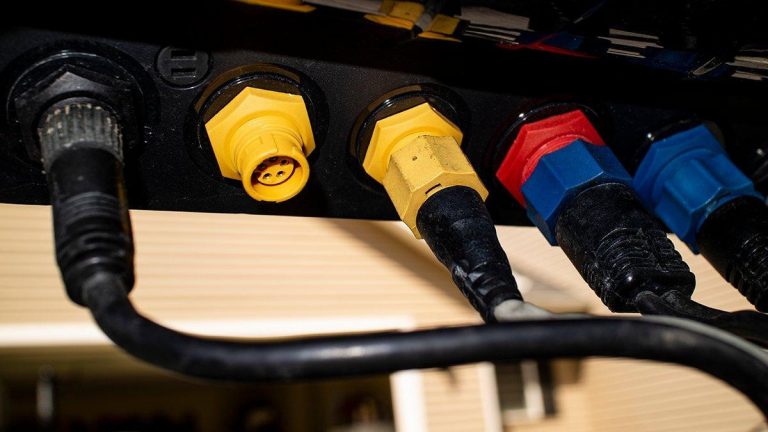 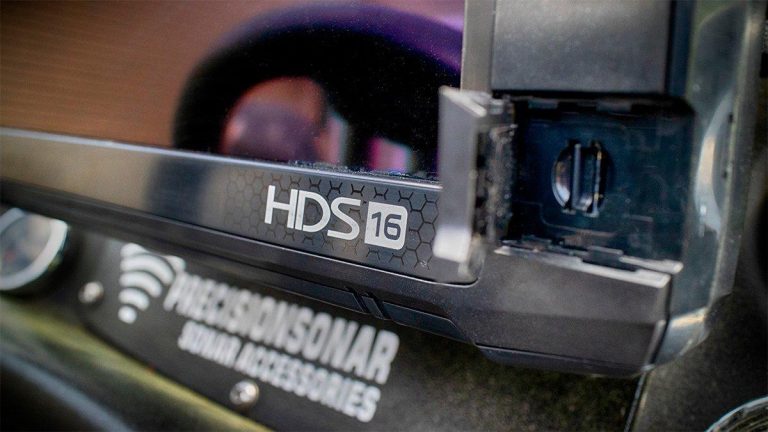 Backside of the Lowrance HDS Carbon 16