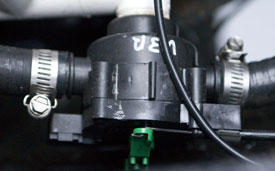 Yesterday morning before work, my partner and I decided to go fish a few hours just to see if there was A) an early morning bite in some shallower spots than we’ve been finding the bass lately and B) if we could find a school of keepers to maybe fish the Tuesday nighter.

Low and behold we found both. Early in the morning we hit a couple fish weighing more than 4 pounds, with one weighing 5-4. So we were pretty pumped. Then we went Structure Scanning with my Lowrance HDS 10 unit. And as luck would have it we found a deep school of bass and caught a bunch to 3 pounds. So we decided to throw our hat in the ring and fish the Tuesday night jackpot.

Got home and got the boat batteries charged and remember, my livewell control knob broke off a couple weeks ago. Turns out at the time it broke off I found out the control cable was seized up tight. I could barely switch it from Recirc, Empty or Auto with a pair of pliers pulling the lever directly. It was locked up.

I assumed the cable must have got bent or something when I installed my new HDS units or the new Sirius Satellite Weather module. It all runs through the same conduit. But I went ahead and removed the back panel and spare prop and sprayed some Royal Purple Maxfilm on the rocker arm, cable and sheath at the source of the valve. This stuff is like WD-40 on steroids!

All of it is located in the bilge area and it can get quite nasty with mildew and other unspeakable organisms in there. It’s something you should clean out at least once a year with diluted bleach.

Well yesterday we decided to just see if we could put the livewell into auto mode and just keep pumping water into it all tournament. I grabbed the cable with the pliers and it moved easily and effortlessly. I ran up to my local Ranger Dealer, Jet-A-Marina, and they swapped the livewell knob assembly out with my broke one under warranty. In five minutes, I had the old knob off and the new knob on and the livewell control works as good as it did when I bought the boat.

Maxfilm is like magic on rusted, locked, or gummed up parts. It took my livewell controls that were all but trashed and locked up and turned them into perfectly working equipment again. I’m sold on the stuff now.

If your livewell control is giving you fits and feels like it’s going to break because it’s so hard to turn, don’t fret. Clean out your bilge area, find the livewell control valve, cable and sheath and give them a liberal spray of Royal Purple Maxfilm and let it soak in and sit. Chances are you’ll get it working again with a lot less hassle than I had.